Todaypennsylvania.com
Home Sports A ‘step in the right direction’ Franklin is cautiously optimistic about the... 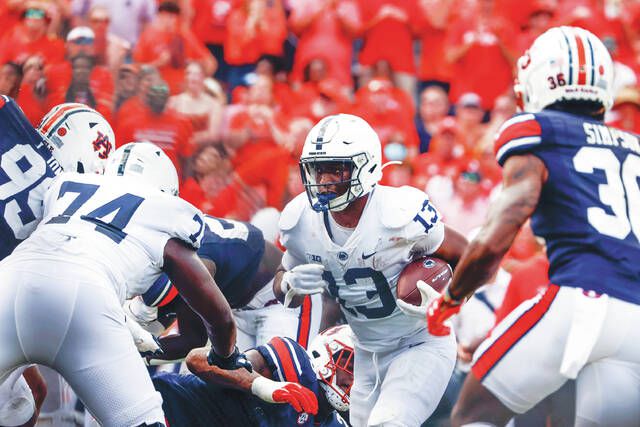 Three weeks into the season, James Franklin isn’t ready to change his public approach to his offensive line.

At least not yet.

Franklin made a point to open the preseason by saying he wasn’t going to predict a move forward for a beleaguered unit, as he has done for several years.

“I’m not going to do it this year,” Franklin said in late July before training camp opened. “I’ll let them prove it to you on the field.”

They certainly did on Saturday.

Even if Auburn ends up being one of the SEC’s worst teams this year — and Penn State’s 41-12 win suggests it might — the Tigers still have plenty of talent and their defensive line serves as a strength of the defense.

That didn’t stop Penn State from getting a decisive victory in the trenches. In a big turnaround from last season, the Nittany Lions shut down the ground game in the second half and didn’t allow any of the three quarterbacks who played.

But Franklin wasn’t about to brag Tuesday. Not with the fact that we have three games against Michigan, Minnesota and Ohio State in October.

“Yeah, I’m still not ready. I’m going to wait,” Franklin said at his weekly press conference. “Like I said, you guys will tell me exactly how they play. Obviously, I really think last weekend with zero sacks and being able to run the ball the way we ran the ball, being on the road and dealing with the crowd noise — which can be difficult for an offensive line — I think it was a step in the right direction. direction.

“But we still have work to do and I’m still not ready to hit the table. But I probably won’t be all year because I know that as soon as I say something positive, something will go wrong. So I’ll keep my thoughts.”

Olu Fashanu was solid in his first season as the starter at left tackle. He gave up his first quarterback touchdown of the season against Auburn, according to Pro Football Focus.

Jus Scruggs, another year removed from a major career-threatening car accident, has flourished in the transition from guard to center. Sal Wormley is also back from the injury that cost him all of last season to take Scruggs’ old spot at right guard.

Landon Tengvall and Hunter Noorzad both got reps at left guard, while Kaydon Wallace and Bryce Effner also split tackles.

True freshman sensation Nick Singleton, in particular, had big success breaking huge runs down the right side, which he did twice more Saturday after going 40-plus yards three times against Ohio the week before.

Franklin was quick to credit the improvement in blocking tight ends — particularly starter Brenton Strange, who beat his man Saturday to help Singleton — as a big help.

“We talk about the O-line and the run all the time. I think our tight ends are making a big impact as well,” Franklin said. “I think Brenton is playing a very spread tight end right now. I think real football people understand that. I think that’s going to help us throughout the year offensively.”

All seven regulars on the offensive line shared the coach’s offensive player of the game award. Defensively, it was safety J’Air Brown and defensive end Addis Isaac.

The Lackawanna College product is the second Lions quarterback to win national weekly honors, joining Joey Porter Jr., who had a school-record six touchdown passes in the season opener.

Brown is the first Penn State player to win a weekly award as part of the Nagurski Trophy, which recognizes the nation’s best quarterback for the season in December.

Debate in the dormitory

Now 3-0 and climbing to No. 14 in the AP Poll and No. 15 in the Coaches Poll, Franklin hasn’t been shy about publicly demanding more improvements for the program.

Asked about the play of some freshmen, including quarterback Dani Dennis-Sutton, Franklin took the opportunity to mention that the Lions nearly landed Dennis-Sutton — a top-100 recruit — because of Penn State’s dorm conditions .

Dennis-Sutton is a Delaware native who played high school as a boarding student at the McDonough School in Maryland.

“He had his own dorm room at McDonogh, and that was a big part of the recruiting process,” Franklin said. “A lot of the schools we recruit at have athletic dorms or soccer dorms. Auburn just built a football dorm that people will say you’re not allowed to do. There is a way to do this within the rules and still achieve the same thing.

“It was an important part of the recruiting process. We lost a kid a few years ago because we didn’t have singles for the football team like other schools. This kid got drafted and now he’s playing in the NFL, and we almost lost Dani because of it.”