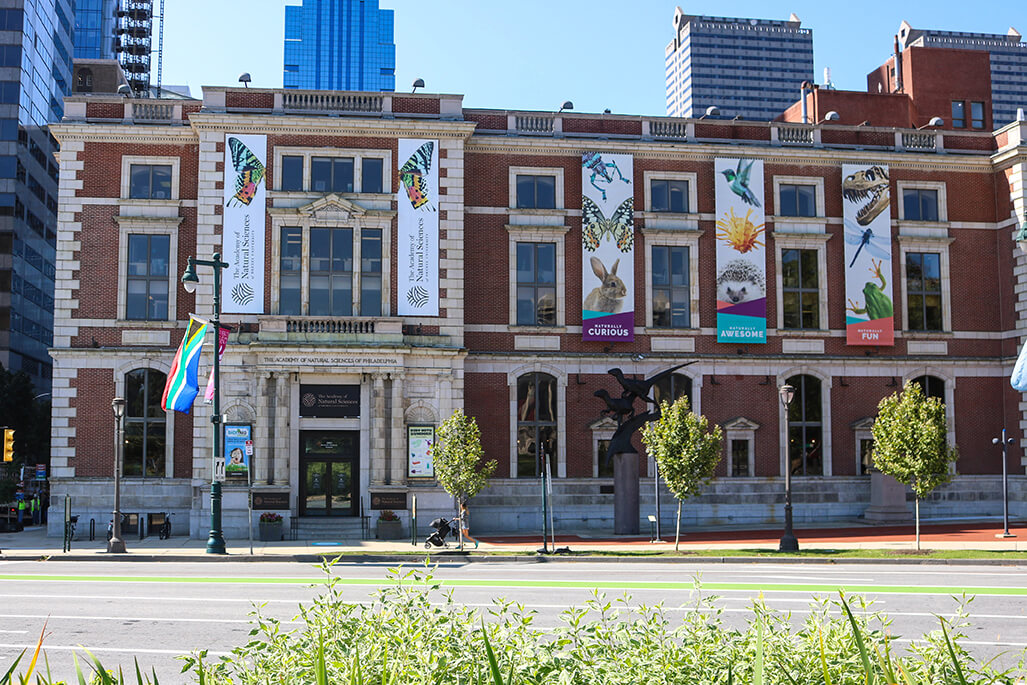 
Founded in 1812 and located in the village Benjamin Franklin Parkway in Philadelphia, at Drexel University Academy of Natural Sciences played an important role in promoting research as the first natural science institution in America. Since its inception, among the prestigious members have been Thomas Jefferson (whose fossil collection is in the Academy), John James Audubon, Charles Darwin and Marie Curie.

The Academy’s leader in biological research, the library and archives contain 200,000 books, including some from the 1500s, documenting an understanding of the natural world from the beginning of modern science. Numerous scientific societies began at the Academy, including the American Medical Association in 1847, the American Association for the Advancement of Science in 1848, and in 1876 the American Entomological Society chose the Academy as its headquarters to house its collections and library. The Academy participates in many environmental activities and offers programs to educate the public.

Over two centuries, the museum has amassed a collection of more than eighteen million specimens that are noteworthy for the geographical, biological, and historical significance collected during world expeditions, including hundreds of plants collected by Lewis and Clark.

In 1868, the Academy of Natural Sciences became the first museum in the world to house a dinosaur skeleton. “Haddy,” or Hadrosaurus foulkii, was found in Hadonfield, New Jersey, near Philadelphia in 1858 and identified by Dr. Joseph Lady. The public demonstration aroused great interest.

Stroll through the tropical garden with more than a hundred live butterflies of different species from Central and South America, East Africa and Southeast Asia at the Academy Butterflies! exhibit. NOTE: Butterflies! temporarily closed due to the COVID-19 pandemic.

Outside inside it is a children’s discovery center where young, inquisitive minds can explore the natural world by observing animal habitats. There are also dozens of historical ones dioramas displaying animals in their natural habitat throughout the museum.

To see paleontology in action, head to the Fossil Prep Lab, where workers prepare fossils for study and display. Additional activities of the museum include a show of live animals and presentations by naturalists, allowing visitors to get acquainted with the creatures and specimens. Special events include Wild Wizarding Weekend, Bug Fest, Paleopalooza, Animal Superhero Weekend, Xtreme Science Days and more.

Explore the hidden beauty of one of life’s most valuable resources – water – by visiting The invisible world of water. The exhibition will introduce visitors to two fascinating microscopic natural phenomena – snow crystals and diatoms – using artwork, animation, holographic light field displays, sculptures, rare books, drawings, videos and more. Visitors can look into microscopes to analyze these artistic phenomena, or view images of a scanning electron microscope from the Academy’s diatomaceous water collection, the world’s second-largest. The invisible world of water available until May 1, 2022.

Also on view at the Academy of Natural Sciences, Extreme Deep: Mission to the Abyss reveals the secrets of the greatest depths of the ocean. Visitors will have the opportunity to explore newly discovered life forms, bubble thermal holes, deep-sea research submarines and shipwrecks, including Titanic. Guests will learn about amazing creatures that thrive in complete darkness, as well as technologies that have only recently allowed scientists to travel to the ocean floor to discover creatures whose existence no one knew about. Extreme Deep: Mission to the Abyss will be available until July 24, 2022.