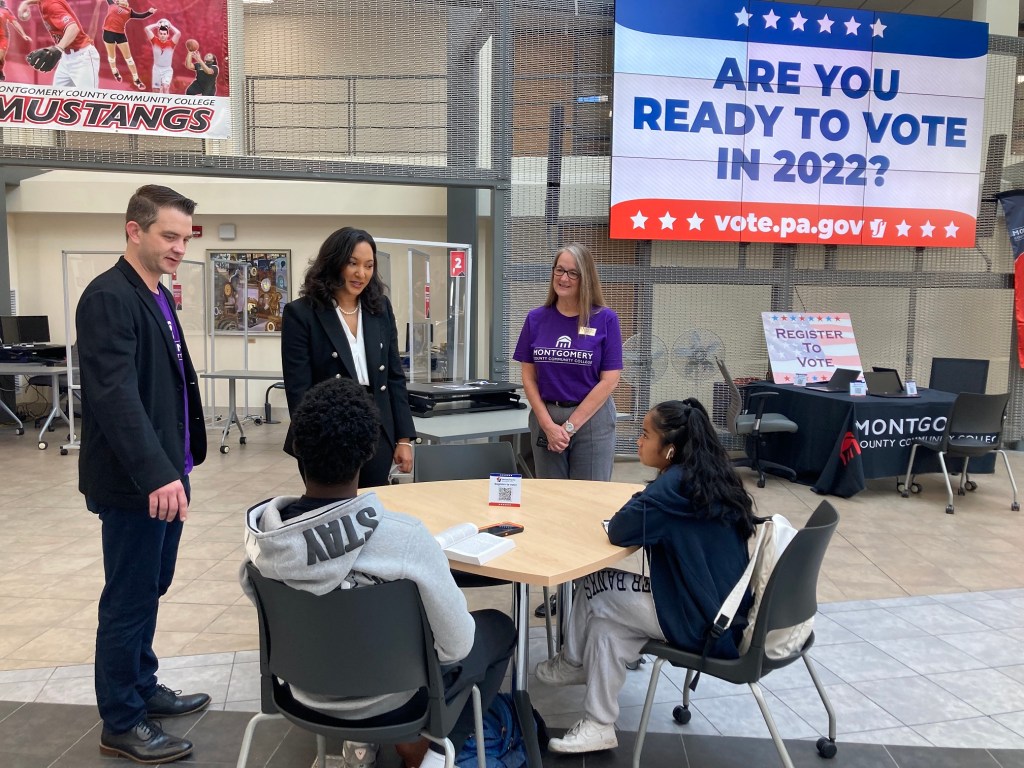 BLUE BELL — The 2022 general election is less than two months away, and voter registration efforts are ramping up across the region.

Citizens who have the right to vote must register to vote between November 8 and October 24.

In Montgomery County, 601,389 people were registered to vote as of Tuesday afternoon, according to Montgomery County Communications Director Kelly Kofrancisco. Voters will choose candidates to represent Montgomery County in Harrisburg and Washington, D.C., in high-profile races for governor and Pennsylvania’s Senate seat.

Registered voters can cast their vote by mail or in person at a polling station. As of Tuesday, the Montgomery County Office of Voter Services had received 91,098 requests to mail ballots, according to Cofrancisco. So far, more than 900,000 mail-in ballots have been requested statewide, according to Chapman.

While a number of students had already registered to vote, Chapman and other higher education officials spoke with about a dozen students during her visit, according to a Montgomery County Community College spokesperson.

“I thought it was important to focus on community colleges,” Chapman said in a telephone interview Tuesday morning. “They are really the cornerstone of communities.”

The college’s campus at 340 Dekalb Pike is one of more than 400 designated sites around Montgomery County.

Along with new voter registration opportunities, Chapman has highlighted several voter education initiatives as part of the state campaign, including text and email messages, as well as online, over-the-air and billboard advertising on the Pennsylvania Turnpike. Chapman sought to raise awareness about how to register, how to cast a ballot and how to fill it out.

“It’s important to participate as a whole, just being part of a democracy,” Bettinger said. “We have students of all ages and stages of life, but many of our students are just becoming adults on their own.”

“They’re graduating from high school and it’s important for them to be involved in their communities and in the democratic process because that’s what it’s all about,” he continued. “Decisions are made by those who show up, as the saying goes, and now they are of an age to make their voices heard.”

Chapman said she found during the conversations that Montgomery County students are enthusiastic about voting in the upcoming election.

That enthusiasm is a trend for the local institution of higher education, Bettinger said, citing the community college’s 77.3 percent voter registration and 86.5 percent voter turnout in 2020.

“What we’re seeing is we have a high registration rate, but in particular, if those students are registered, they’re going to vote,” Bettinger said.

Anyone with questions about voting in Pennsylvania can visit vote.pa.gov or call the voter hotline at 1-877-868-3772. Montgomery County voters can visit the county’s Voter Services office at montcopa.org/753/Voter-Services or call 610-278-3280. The office is open 8 a.m. to 4 p.m., Monday through Friday, on the sixth floor of One Montgomery Plaza, 425 Swede St., in Norristown.

Zach Lipowski and Adam B. Stein will direct “Destination 6.” movies