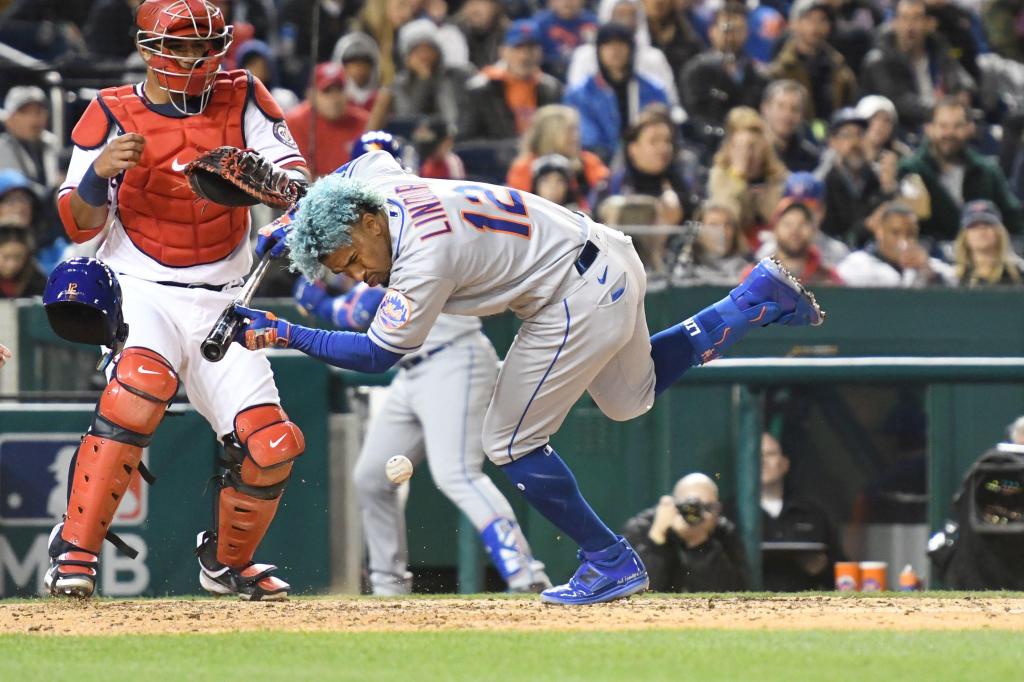 WASHINGTON, DC – Frustration erupted on the field in the second game of 162, with most of those emotions coming from Buck Shawolter.

The benches and bullpen were cleared in the fifth inning of the Mets ’7-3 victory over the national team Friday night after Steve Cishek threw a fastball at Francisco Lindar, who seemed to hit him near the jaw and C-flap of his helmet. It was the fourth time in two days that the Mets striker had received a hit.

“Such things can’t happen if you throw in there too,” Mets manager Buck Shawolter said.

Lindar fell to the ground when Showalter was the first to come out of the dugout, visibly distraught when he barked his disapproval of the citizens. When Lindar was still in the fall, there was a clash at third baseline, centered on Nationals manager Dave Martinez and several other Mets players.

Shortstop Mets soon got to his feet and went to the fight, but was shocked by the blow on the step. A few minutes later Lindar left the field with the coach, and Chishek was thrown out, apparently without warning. Chishek expressed his dissatisfaction with the judges before leaving the field. Chishek later apologized to Lindar for hitting him while shortstop was undergoing an X-ray.

“I’m proud to be the New York Met,” Lindar said. “I was hit. I was on earth. I heard a fight, I look up, my whole team is there. There’s the whole coaching staff. … It shows unity. I’m happy that when I looked up, there were my boys. “

The Mets later announced that Lindor’s X-rays of his jaw were negative, and the short stop also underwent concussion protocols. Lindar said he was grateful for that flap on the helmet that protects the jaw, otherwise the injury would have been even worse.

“I think one of my teeth may be cracked, but not bad,” Lindar said. “I can still smile.”

Shawolter was furious because it was the fourth time the Nationals pitcher had drilled the Mets striker in just that series. On Thursday, James McCann was twice hit, and Pete Alonso was hit on the shoulder or helmet, resulting in a bloody lip. Shawolter said he thought the judges made the right call by ousting Sishek. A report on the pool with crew leader Mark Carlson shows that Chishek was taken out of the game for continuing to aggravate the situation after hitting the field.

“It’s dangerous,” Shawalter said before Friday’s game on the subject of his strikers getting drilled. “If he (the pitcher) doesn’t have a team, you can’t let him fall there, or you can’t let him make your club.”

Max Scherzer, making his debut for the Mets and confronting his former team, responded to Lindor’s strike on the point, leaving the side at the bottom of the fifth.

“No one is trying to drill anyone,” Scherzer said. “Obviously, the ball went to Chishek there. It’s a cold night. The ball may slip on you. I really feel like this is what happened tonight. Yes, at this point everyone is hot. But my task is to go out and strike. I can’t do that. “

The story of Scherzer’s quality start on Friday was marred by drama on the field. The right-handed veteran has returned to Washington and met with the Nationals for the first time since 2010. He received a standing ovation from the home hall, for which he won the World Series in 2019. The Nationals on Thursday compiled a video in honor of Scherzer that his former organization, which has been operating for more than six years, played during the inaugurations.

“It’s almost good that it was the first,” Scherzer said of the meeting with citizens. “Just get it out of the way and let’s move on and keep going. There are a lot of great memories here, but the team is different. This is not the team I played with. “

Scherzer conceded three earned runs on three hits and recorded six strikeouts in six innings on Friday night. His flaw came to Josh Bell in the home run twice, which tied the game 3-3 in the fourth inning. But Scherzer recovered quickly, coming off with 8 of the next nine beats after Bell thundered.

Also forgotten by the time the Mets won their second game in a row against the Citizens was Jeff McNeill’s holiday feat. McNeil, who turned 30 on Friday, celebrated his birthday for the second year in a row. He is the 16th Mets player in the history of the franchise to be Homer on his birthday. McNeill joined Mike Piazza and Jim Hickman as the only Mets players to go twice on their birthdays in their careers.

“Give good traits this one year, one to one,” McNeil said. “It’s pretty fun to play a good game on your birthday.”

McNeill said a situation like the incident with the cleaning of the benches on Friday night could absolutely bring the Metz closer. “Everyone on this team supports each other. You saw it today. I think this is a good group of guys. Knit tightly. I am happy to be part of this team. “

The game on Friday night also had a few breaks. Nationals Park had a problem with the lighting before the game, which led to a 14-minute delay in the first inning. The game was then suspended until the benches and bullpen were cleared after Lindor hit the step. The game was postponed again after Chishek was thrown out, and Doolittle took time to warm up. Finally, a rain delay occurred at the top of the ninth inning without exits and Pete Alonso at second base.