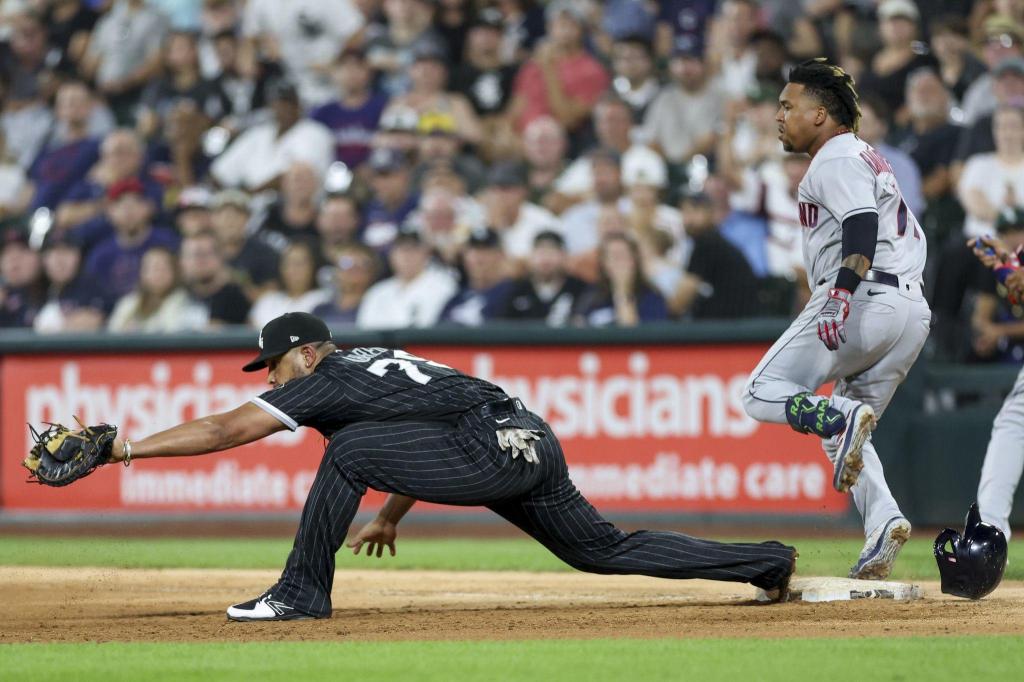 The Guaranteed Rate Field crowd knew the magnitude of the moment when Jose Abreu faced Emmanuel Claes with the tying run on second in the 10th inning on Tuesday.

Abreu singled to right-center, scoring Elvis Andrus to give the Chicago White Sox hope in a must-win game against the Cleveland Guardians.

Miles Straw broke a 5-5 tie with a two-run double against Jake Diekman. Stephen Kwan followed with an RBI single and Jose Ramirez hit a sacrifice fly as the Guardians handed the Sox a crushing loss in the American League Central race.

The Sox trail the Sentinels by five games.

The night started with AL Cy Young Award candidate Dylan Saez on the mound for the Sox. He overcame some early bumps and allowed one run on four hits with three strikeouts and three walks over six innings.

He got defensive help from second baseman Josh Harrison, who made spectacular plays — one on a grounder and another on a soft liner — to relieve Amed Rosario of two hits.

The second race was Cease allowed. Andres Jimenez started the serve with a slicer from the left. AJ Pollack tripped while running for the ball and Jimenez reached third for a triple. He scored on Austin Hedges’ sacrifice fly to right.

Pollock played a role in helping the Sox take the lead in the sixth.

Andrus led off the inning with a single. He stole the second, a call that was backed up after a video call from the Guardians. Yoan Moncada is gone and the Guardians have replaced starter Aaron Siwale with reliever Nick Sandlin.

Aubrey got a hit on Sandlin’s first pitch, loading the bases for Eloy Jimenez, who tied the game with a single to center.

Vaughn struck out, walking Pollock to the plate with the bases loaded and one out. Pollock reached second on what looked like it would be an inning-ending double play.

Gimenez threw to Rosario for the force at second, but Rosario’s throw to first got past Owen Miller. Two runs scored during the streak to make it 3-1.

The Guardians took advantage of back-to-back walks to start the seventh and tie the game.

Kwan led off the run with a single, and with two outs and runners on the corners, Ramirez hit a grounder deep in the hole and just beat Andrus’ throw to first. A run scored on an infield hit to tie the game at 3.

Rosario tried to break the tie by scoring from second on Josh Naylor’s infield hit. Andrus dived into the grass of the field and threw it into the plate. Catcher Sebi Zavala applied the tag and Rosario was called out to end the inning.

He appeared to be over the tag, but the Sentinels were unable to challenge, losing a sixth-inning review.

Naylor’s RBI single and Oscar Gonzalez’s sacrifice fly to center put the Guardians up 5-3 in the top of the 10th.

The Sox tacked on a run when Zavala scored on a fielder’s choice. Andrus reached first on the play and stole second. Abreu hit him on a 1-2 count to tie the game at 5.

The Guardians responded in a big way in the 11th.

Pollock hit a two-run homer in the bottom of the 11th, but the Sox got no closer and found themselves in a huge hole with 14 games left in the regular season.