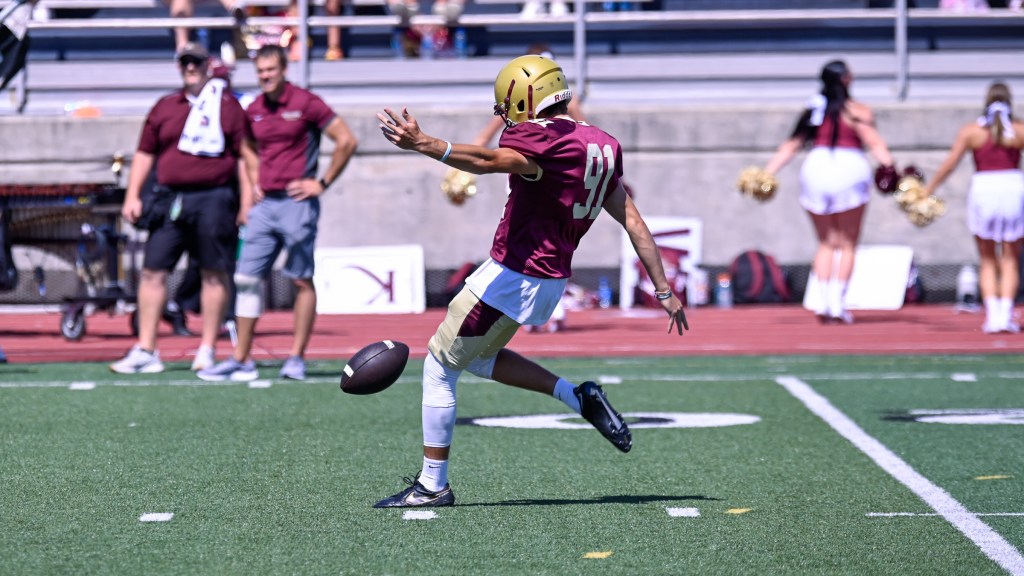 Playing in his first varsity game, Kutztown University punter Nathan Millard stood in his end zone waiting for the ball.

After a botched snap, the ball bounced several times before reaching Millard, who scooped it up off the turf and booted it 42 yards before an opposing player could touch it.

The punt was Millard’s first with the Golden Bears and one of seven he registered in his collegiate debut. A true freshman and Daniel Boone graduate, Millard is one of the few young players to make a big impact for Kutztown in 2022.

“It’s a tough spot,” Golden Bears coach Jim Clements said. “He did a good job. We are very happy to have him.”

Playing in his home county, Millard took over punting and starting punting duties for Kutztown after a stellar high school career with the Blazers.

While the stats and accolades speak for themselves, Golden Bears special teams coordinator Jim Ketner recruited Millard for his attitude and poise.

“He’s a competitor,” Ketner said. “That’s what you’re looking for—someone who can handle success, but more importantly, who can recover from failure.”

While he had offers from several Penn State Athletic Conference programs and a Division I FCS team, Millard ultimately decided to stay close to where he grew up in Birdsboro.

“I love the campus,” Millard said. “It’s close enough to home that I can go home for the weekend if I need to, but it’s far enough away that I feel like I’m away from home in a different area.”

“Our guys know he has a very strong leg,” Clements said. “They trust him.”

In his first collegiate game, Millard recorded seven punts, four of which were returned inside the 20-yard line, and averaged 41 yards per punt. He also had one hit in Kutztown’s opener, a 3-0 loss to Assumption.

“It was exactly what I was looking for,” Millard said of the program and the university. “I’m really excited to be here.”

Millard got his first opportunity to play in front of the home crowd at Andre Reed Stadium on Sept. 10 in a 24-19 win over then-No. 17 California (Pennsylvania). He had three punts with a long of 46 yards.

“It feels great,” Millard said of playing close to home. “I have people who are not my immediate family coming to watch me.”

After three games into his college career, Millard leads the PSAC East with a 41.4 yards per punt average. He had 11 punts of 47 yards and four of them stopped at the 20-yard line.

Millard will replace Dean Kricic, a 2021 AFCA First Team All-American. Kricic was instrumental in the Golden Bears’ success as they won the 2021 PSAC Championship and advanced to the quarterfinals of the NCAA Division II Championship Playoffs.

“The punt is a play in football where you can turn the field over,” Ketner said. “You can change the momentum.”

In addition to punting, Millard has 15 punts this season, six of which are touchbacks. Although he handles all of the kicking and kicking duties, Millard said he enjoys hitting balls and kicking the most.

Although he has yet to make a field goal in a game, Millard has been splitting reps in practice with fellow kicker Nick Capalino, a redshirt junior. Millard said he feels comfortable kicking 55-yard field goals.

Millard has worked on increasing his field goal range over the past few years while working under kicking and field goal coach John Zima. Millard said he has increased leg strength and improved mechanics with Zima’s help.

“He’s taught me everything over the years,” Millard said. “Props to him (for just getting me to where I am today.”)

With nearly his entire college career ahead of him, Millard said he aims to lead the PSAC in yards per punt and set the Kutztown program record. However, Millard was quick to point out that his goals are not achievable without the support of his teammates.

“It’s all about the guys around me,” Millard said. “As long as everyone else is doing their job, that’s what will make me successful.”

Millard is one of nine players on the Golden Bears’ roster to graduate from Berks High School and one of four true freshmen to play college football in their home county. Although they are former rivals on the field, Millard said he enjoys having a large Berks County contingent on the team in Kutztown.

“It’s awesome,” Millard said. “It’s cool how we used to play (against) each other, but then everyone comes together.”

A well-rounded student-athlete, Millard will look to lead the Golden Bears to another PSAC title this season. Millard is expected to play a major role in Kutztown for the foreseeable future, whether he’s kicking or kicking.

“He expects success, whether it’s on the football field or in the classroom,” Ketner said. “He’s a perfect fit for us. He’s one of our guys.”

Meanwhile, Thomson leads the Phillies to the brink of the playoffs – Reading Eagle