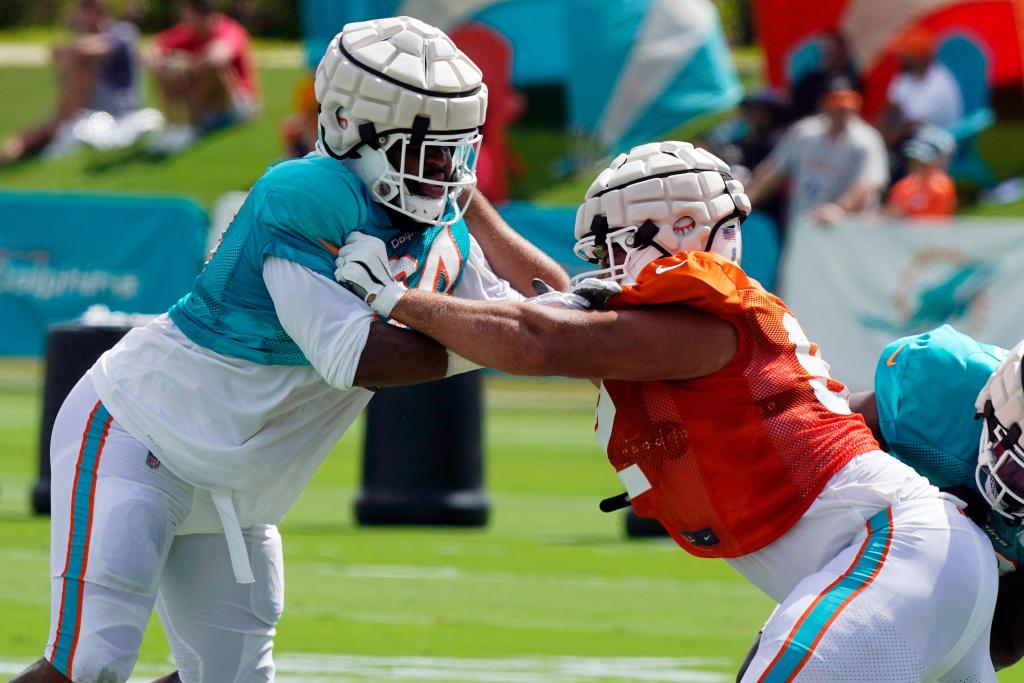 While the Miami Dolphins are set to hold a pair of joint practices with the Philadelphia Eagles on Wednesday and Thursday ahead of Saturday’s preseason finale, they held their final intrasquad practice of training camp on Tuesday.

It was an abbreviated session with the players for stretching and positional drills before heading outside for the team portions of practice.

Dolphins quarterback Tua Tagovailoa had plenty of deep connections — with wide receiver Tyreek Hill, tight end Mike Gesicki and even quarterback Alec Ingold — during a short day’s work, but the theme of the drills was Miami’s offense looking to set up a rushing game and the defense up front as the main stuff. .

A variety of early runs by quarterback Chase Edmonds, who was in orange on Tuesday as the primary practice player last Thursday, didn’t produce much. Defensive tackle Zach Zieler lost a tackle on the first play of the game. Outside linebacker Porter Gustin wrapped up Myles Gaskin on a spike for a loss later. Raekwon Davis and outside linebacker Cameron Good were also among the defenders who made stops behind the line of scrimmage throughout.

“It’s tough,” center Michael Deiter said after facing the Dolphins’ defense in practice. “It’s such a fun challenge to go up against such a tough defense and a very good front seven, even eight. It definitely makes us better, because if we fall even a little bit short, we will not be successful. When one guy is here, one guy is there, it can be very ugly against a good NFL defense.”

The Dolphins are looking to get the running game going quickly, as they averaged just 2.6 yards per rush in two exhibition games.

“I think our team is doing a great job of building and learning from each other,” Zieler said of the game. “The defense-offense is very competitive every practice and it’s very exciting to watch.”

Edmonds has been seen breaking through the line to get a big boost in the team’s playmaking at least once.

Tagovailoa had Hill’s one touchdown in single coverage against undrafted rookie cornerback Kader Koch. He found Gesicki wide open over the top, presumably freed up by play design, as Jevon Holland pursued Gesicki, which would have resulted in a touchdown about 65 yards after the run. Tagovailoa bought time by getting to the pocket and went through a progression when he found Ingold open about 25 yards down the sideline. Ingold said he continued to play after practice. …

Teddy Bridgewater found River Cracraft several times to great advantage. One was about 20 yards up the middle, and he later hit it wide open in the end zone on a defensive breakdown in coverage. …

Offense practice situations when he was backed up for a first-and-10 at his own 2-yard line. Tagovailoa hit Ingold for 8 on his first play, giving the offense some breathing room, then found Hill for a third-down conversion. Bridgewater had a failed third down pass, moderately deep, that was broken up by Elijah Campbell. …

Duke Riley sacked rookie quarterback Skylar Thompson. Melvin Ingram was behind on Tagovailoa Hill’s one tackle for a loss when Ingram almost got a touchdown on a pass that would have been dangerous for the offense if deflected. …

Kochov, while on the receiving end of a pair of long completions, also had a pair of pass breakups. On one of them, he caught fellow undrafted rookie Braylon Sanders on a floating Bridgewater pass. Another was slanted against Mohamed Sanu. …

The short drive ended with Bridgewater throwing a pass to tight end Hunter Long in the flat on fourth-and-2.

Outside linebacker Jaelan Phillips had two sacks and another when he touched Tagovailoa rushing up the edge, forcing him to step into the pocket and buy time. All of that activity during a short practice where the running game was a big part of the offense’s work.

Braylon Sanders had a false start to start one of the drives as the offense backed up at the 2-yard line. It’s only a 1-yard penalty, half the distance to the goal line, but it makes the offense much tougher in a real game scenario when the wide receiver can’t take the outside penalty. After standing out earlier in camp and hauling in three catches for 40 yards in Saturday’s preseason game against the Raiders, it’s still hard to imagine there being room for an undrafted rookie in that wide receiver room.

Left tackle Terran Armstead returned to practice Tuesday and saw plenty of 11-on-11 action. Wide receiver Jaylen Waddle also attended the first team practice with a sleeve on his right leg, but did not participate in the team portions of practice. Greg Little also returned to practice on Tuesday.

Outside linebacker Andrew VanGinkel was not seen in Tuesday’s session, as was cornerback Keyon Crossen, who coach Mike McDaniel listed as “day-to-day” after being injured in Saturday’s exhibition loss to the Raiders. Running back Sony Michel and linebackers Brennan Scarlett and Calvin Munson were also absent Tuesday.

Safety Eric Rowe trudged with the team, but he watched team practice in shorts. Tight end Tanner Conner also sprained but did not participate in practice with a brace on his left leg.