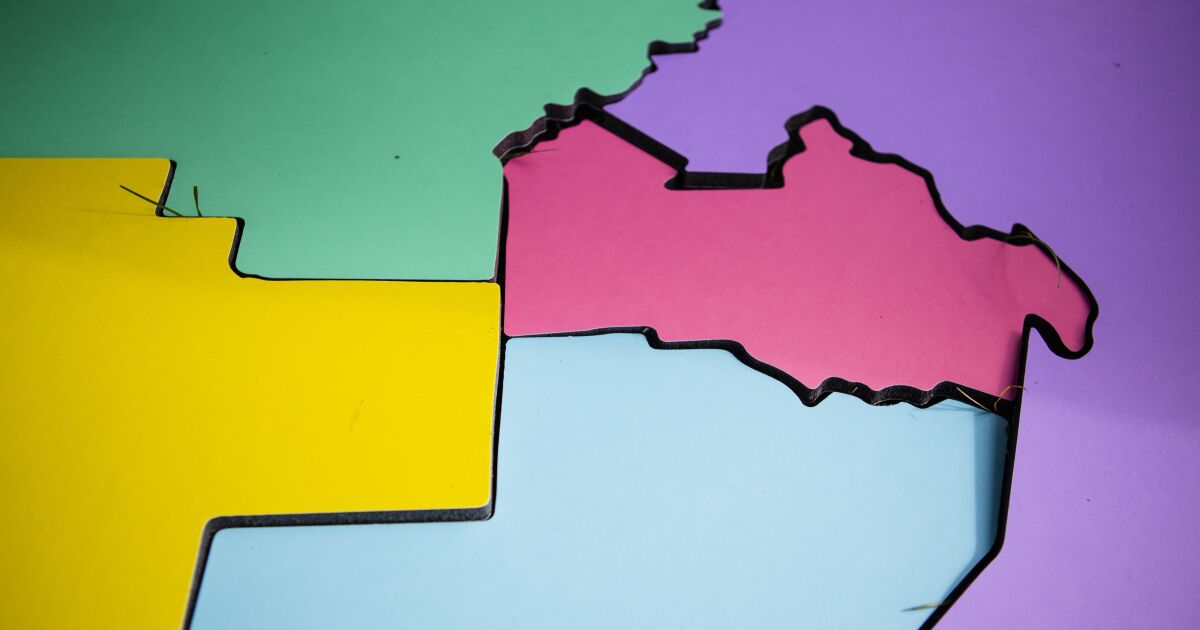 The updated state House and Senate lines were approved by a commission made up of legislative leaders and an independent chairman and unanimously upheld by Pennsylvania’s highest court in the latest decade-long redistricting process.

Maps helped spawn wave of retirements who have already reshuffled the 253-member Pennsylvania General Assembly, a preview of the changes the Nov. 8 election could bring.

These untested new district lines could give Democrats an elusive majority in the House, potentially shifting the balance of power in the legislature. Or the new maps could preserve the status quo of Republican control.

Below, Spotlight PA breaks down three things to watch for on November 8:

Fewer competitive districts (but the remaining ones are more competitive)

After this year’s redistricting cycle, both the state House and Senate received less competitive seats.

Experts evaluate political maps on competitiveness, predicting future results based on past election cycles. According to Dave’s Redistricting App, a nonprofit map analysis website, just under 40 seats in both chambers can be classified as competitive — meaning neither major party has an overwhelming majority in the district — compared to nearly 60 in previous maps.

This is partly due to population movements over the past decade. More people left the countryside and moved to urban and suburban areas that traditionally lean toward democratic forces.

Pennsylvania’s constitution doesn’t require competitive districts, but it’s a top priority for many citizens and advocates who have lobbied lawmakers to make the process more inclusive and transparent. More than 6,000 voters identified competitive elections as their top priority in a poll conducted by Draw the Lines, a redistricting project of the Committee of Seventy, a group that advocates for good government.

While both maps saw the number of competitive districts shrink, they are now more representative of the state’s partisan makeup, according to Dave’s Redistricting App.

Increasing the number of competitive districts would require manipulation of Pennsylvania’s political geography—or the way voters are concentrated or dispersed across the state—and would affect the compactness, contiguity, and equality of the districts’ population, which is a requirement of the state constitution. Artificially creating more competitive districts would also affect the partisan fairness of the map.

“You want competitive districts, but in some districts you can’t have that,” said Justin Wheeler, executive director of Draw the Lines. As an example, he cited Philadelphia, where more than three-quarters of voters registered as Democrats.

Competitive districts in the new legislative maps are concentrated in the suburbs of Pittsburgh and Philadelphia, with many other competitive races in the Lehigh Valley and around Harrisburg, Erie and State College.

According to Dave’s Redistricting App, they contain a slightly higher percentage of independent voters on average compared to the 2020 maps, indicating more voters are willing to vote for either major party come election time.

The new legislative maps also have a higher response rate—meaning these maps are more likely to produce a General Assembly that reflects the share of the vote each election cycle.

“Compassion is essentially the opposite of partisanship,” Villiers said.

House Democrats have a better chance

Operatives in both major parties agree that Democrats are likely to cut the Republicans’ 111-92 lead in the House because of the new lines.

According to the old map, 80 seats were Republican and 78 were Democratic, according to Dave’s Redistricting App. The rest were classified as competitive, with electoral margins between parties typically less than 10 percentage points.

According to the new map, 81 seats are Republican and 95 are Democratic. While Republicans have nearly built a supermajority in the lower house in recent years, the new lines show that Democrats are likely to win a larger share of the seats they deserve (barring major shifts in voting patterns among voters).

Why this dramatic shift occurred depends on who you ask. Everyone would agree that’s partly why population shifts from the more rural west to the more suburban and urban east.

Democrats — backed by independent analysts — add that the preliminary maps were drawn to help Republicans. Although Democrats regularly win statewide elections, they have not controlled the state legislature since 2010.

Republicans counter that comparing statewide results and 253 individual races is like comparing apples and oranges, and argue that the old map was designed to protect western Pennsylvania Democrats who simply couldn’t survive the post-Trump political realignment.

The GOP has acknowledged that the new lines will likely shrink their margin, but it’s still an open question whether Democrats can flip the chamber.

“There’s no doubt that the redistricting process was in favor of Democrats,” said state Rep. Josh Cale (R., Beaver), who is leading the House Republican campaign. “That being said, we have the best message, we have the best candidates, and we’re going to win races, period.”

Pittsburgh’s northern suburbs, which include a mix of affluent areas and old industrial river towns, are among the best front-runners for the party to win a majority.

The latter will be represented by either Democrat Arvind Venkat, an emergency room physician, or Republican Cindy Kirk, a former Allegheny County councilwoman.

Previous districts in the area have reliably elected Republican lawmakers, including former House Speaker Mike Turzai, a staunch conservative. However, some municipal seats have started to turn from red to blue, and Democrats hope they can finally make it to the state level.

At last month’s McCandless Community Festival — in the heart of the old Turzai district — Venkat welcomed voters and pitched himself as a candidate who would protect access to abortion, pass tougher gun laws and invest in public services weakened by the pandemic.

“There is a real hunger for new leadership that will make sure state government works for everyone in our community,” Venkat said.

Kirk declined to speak to a reporter at the same event and did not respond to further requests for comment. Her website highlights her healthcare background, noting that she worked as a nurse at UPMC. Her website also strongly opposes new taxes and support for the police, and says Kirk will “back away from the progressive agenda and protect our constitutional rights.”

Other key races are outside of Philadelphia, where some of the last remaining suburban moderate Republicans will be up for re-election in redrawn districts that are now slightly bluer. That includes state Reps. Todd Stevens (R., Montgomery) and Chris Quinn (R., Delaware), both of whom won regularly even when their districts voted for the Democratic presidential nominee by double digits.

“I have always represented a swing district,” Quinn said in an email.

He claimed he did this by working across the aisle and opposing his party when “I felt their leadership was not in the best interests of my district”.

To win, Democrats must convince Pennsylvania voters not to split their tickets. In 2020, voters in key suburban districts supported President Joe Biden and also voted in many Republicans who refused to vote, such as Auditor General Tim Defour, as well as local Republican legislators.

“If people are looking at their choices and they don’t like Doug Mastriano’s extreme policies, they need to vote Democrat because we’ve seen the Republican majority in Harrisburg adopt the same policies,” state Rep. Leanne said. Kruger (D., Delaware), who heads the election campaign of House Democrats.

Areas of opportunity do not look so favorable

Lawmakers tasked with drawing new state House and Senate maps have emphasized a desire to increase minority representation in the General Assembly, citing a sharp increase in the Hispanic population according to the 2020 census.

Legislators saw the districts as an opportunity to achieve this representation. Opportunity districts have a minority of the voting population large enough to influence the election (a threshold that is usually about 30% of a given electorate)—and usually without an incumbent.

There were 11 new ones opportunities of districts with no incumbents involved in the redistricting process. The Lehigh Valley, which has a large Hispanic population, in particular contained one such area.

In a preliminary analysis of five opportunity district races, Spotlight PA found that candidates of color were motivated by open seats that lacked an incumbent rather than the racial makeup of the district in which they planned to run.

The demographic composition of these areas as a whole has not overcome a more deeply rooted disadvantage. Three of the five candidates lost primaries, usually to candidates who had more or previous experience in politics and all of whom were white.

Two candidates entered the general election: Democrats Justin Fleming of Dauphin County and Yesenia Rodriguez of Luzerne County, who was unopposed during the primary.

Fleming, who is running in a district with a majority of Democrats, has worked in state government as a spokesman and commissioner for Susquehanna Township.

Rodriguez, meanwhile, mostly runs a bakery and has little political experience, save for an unsuccessful run for the local school board in 2019. She is also running as a Democrat in a Republican-majority district with little funding. Pennsylvania State Department campaign finance filings show Rodriguez has raised just over $1,000 this year.

Vatro, who did not respond to requests for comment, had nearly $30,000 in available funds as of June and has more than doubled that amount during his campaign.

Despite her lack of voter registration and finances, Rodriguez said her connection to the people of Hazleton, where she has lived for the past two decades, will help her win. The city is the second largest in Luzerne County, and one-third of its population is Hispanic.

She also emphasized the desire to speak directly with every resident of her district, including in more rural areas.

“Money can’t buy votes,” Rodriguez said. “Even though we don’t have money and we didn’t get support from big companies or institutions … we did the work ourselves.”

90.5 WESA is partnered with Spotlight PA, a reader-funded collaborative newsroom dedicated to producing responsible journalism for all of Pennsylvania. Read more at spotlightpa.org.