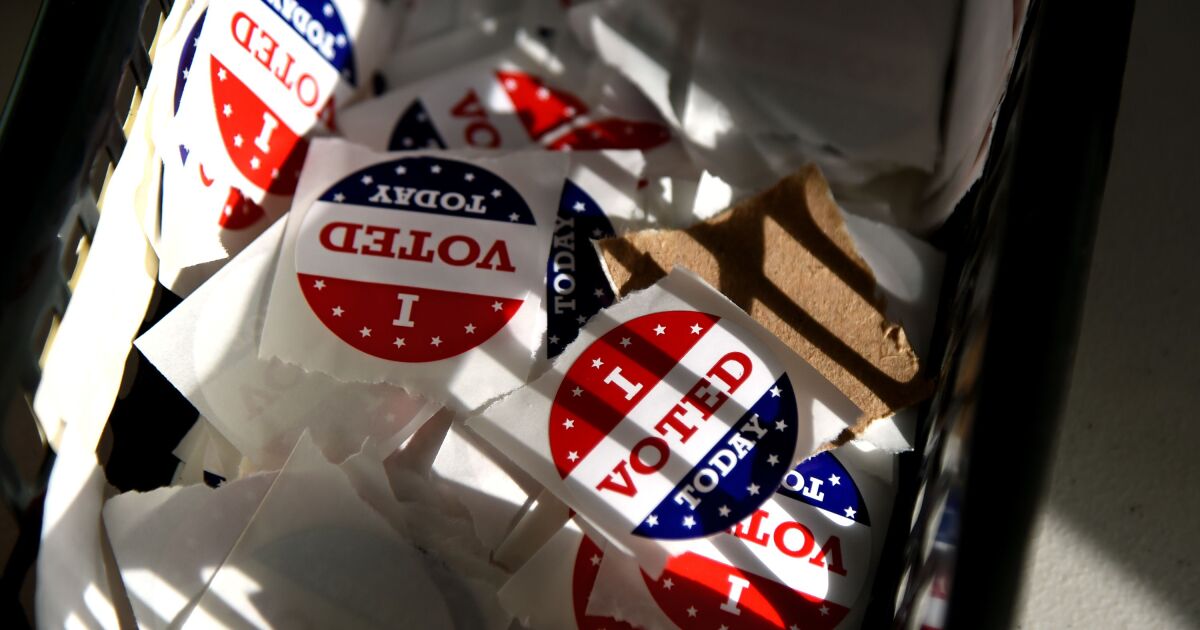 Pennsylvania’s next governor will have a lot of power over the way elections are run, and the two major party candidates plan to wield that authority in wildly different ways.

Election administration is especially important in this race because the commonwealth is a swing state that could determine the outcome of the 2024 presidential contest, and the governor shapes election law and policy. One of the candidates asserts, wrongly, that President Joe Biden won the 2020 election because of widespread fraud.

Democrat Josh Shapiro, who currently serves as state attorney general, notes frequently that in his current role he has defended Pennsylvania’s election laws against GOP lawsuits aimed at throwing out ballots. He has centered his campaign on the arguments that Mastriano is too fringe to be governor and that the GOP senator cannot be trusted to administer elections.

Here’s how the two candidates plan to administer Pennsylvania elections. Mastriano, who does not typically engage with mainstream media, did not respond to requests for comment for this story.

Appointing the secretary of state

Many states elect a secretary of state. In Pennsylvania, the governor appoints one, and the state Senate confirms them. Among other duties, this powerful state official certifies election results, oversees voting processes — including verifying that voting machines are safe and secure — and issues guidance that, while not legally binding, guides county-level election policy.

During the primary election, Mastriano gave one of his most direct statements about appointing a secretary of state to a Mercer County radio host.

He claimed that “we have a fraud problem in Pennsylvania,” but that votes still matter and that if people elect him, he’ll have broad power to change how elections are administered. Mastriano could, he said, “decertify every machine in the state with the stroke of a pen via the secretary of state.”

He has also said he could make every Pennsylvania voter re-register, an action that might technically fall under a secretary of state’s ability to maintain voter rolls, but that election experts say clearly violates federal law.

Mastriano hasn’t publicly said who that secretary of state pick is, but several news outlets have guessed that it’s likely Toni Shuppe, a co-founder of group Audit the Vote Pa. The group has conducted flawed surveys of 2020 voters in a futile search for widespread fraud.

In his official policy statement on election security, Shapiro’s campaign wrote that his Department of State will be on guard for “unpatriotic extremists [who] are taking over election administration,” and linked to an Associated Press report on a rise in state and local politicians and administrators who don’t believe former President Donald Trump lost the 2020 election.

In addition, Shapiro’s campaign said he will “direct his Secretary of State to make more resources available in different languages so that every eligible voter can make their voices heard.”

There are a couple of levels to formally approving — or certifying — election results in Pennsylvania. First, counties assert that their results are accurate, then the secretary of state reviews those results and certifies them to the appropriate authority. In a state Senate race, for instance, that authority is the secretary of the U.S. Senate.

As of this year, those certifications come after two types of state-mandated audits.

One of Shapiro’s big promises is to use his first state budget to bulk up resources for post-election audits — particularly risk-limiting audits, an increasingly popular check of election count accuracy that involves manually reviewing random samples of ballots.

The commonwealth already conducted a simpler audit as a matter of course, but piloted risk-limiting audits in 2020 and will conduct one in every county for the first time this November.

Along with pushing for a 2020 election review that would have involved collecting voters’ Social Security and driver’s license numbers, Mastriano has said he believes the legislature has the power to appoint an alternate slate of presidential electors if lawmakers doubt the outcome of an election. He told former Trump strategist Steve Bannon in a 2020 podcast interview that he believes the U.S. Constitution allows the legislature “to reassert our privileges as General Assembly and oversee the electors that they go to the right person.”

Mastriano was referring to the “independent state legislature” theory, which argues state legislatures have nearly unlimited power over election matters — including the choosing of electors — that supersedes state courts. Many legal experts think the fringe and controversial theory is far-fetched, but several U.S. Supreme Court justices have indicated they’re open to the argument.

Throughout his time in the legislature, Mastriano has sought to take election certification power away from the governor and secretary of state and vest more authority in the legislature. He sponsored a bill that would give election oversight power to a commission with members appointed by the governor and state House and Senate, instead of the administration. Mastriano’s party leaders never took it up, and it remains in committee.

It’s unclear exactly what a Governor Mastriano and his secretary of state would do if they disagreed with counties’ certified election results, as Mastriano did as a state Senator. One election security expert told the Washington Post last year that it would create “chaos.”

Many of Mastriano’s promised changes to Pennsylvania’s voting rules would give people fewer options for casting ballots.

Most significantly, Mastriano has pledged to fully repeal Act 77, the law that legalized no-excuse mail voting in the commonwealth. Mastriano voted for Act 77 when it first passed in 2019, but now says that “unconstitutional meddling from Democratic Gov. Tom Wolf’s administration poisoned Act 77 and made it unethical for Pennsylvania to continue to allow no-excuse mail-in voting.” The statement refers to things like mail ballot drop boxes, which weren’t included in the law but also aren’t explicitly prohibited.

Earlier this year, he circulated a memo for a proposed bill that would create an “Office of Election Crimes and Security,” would make it a felony instead of a misdemeanor to turn in multiple mail ballots, and would require more elaborate election audits.

That proposal would additionally require legislative approval for any election procedure changes that might result from a court decision, and ban the Department of State from entering into a consent decree with a court without legislative approval. Both changes would hamstring the executive branch and judiciary’s power over election matters.

Shapiro’s plans for changing the way Pennsylvania elections work tend to have the goal of making voting easier.

He has said he would veto any bill that restricts mail voting, and push for automatic voter registration — in which eligible adults are automatically registered to vote as soon as they turn 18 or establish Pennsylvania residency, unless they opt out. He also supports same-day voter registration, pre-registration for people younger than 18, early in-person voting, and a ban on firearms at polling places.

He also has said he wants to allow counties to begin processing ballots before Election Day. Prohibitions on early processing are one of the major reasons why Pennsylvania’s election results have been delayed in recent years. Pre-canvassing, as it’s commonly known, has broad bipartisan support, but state lawmakers have been unable to pass an election package that includes it.

In 2021, Mastriano voted for a bill that would have allowed pre-canvassing while also requiring stricter voter ID rules, imposing tighter deadlines to register to vote and request mail ballots, and introducing in-person early voting.

Shapiro has pitched creating a new, centralized website that would report granular election results from every county.

People who register to vote in Pennsylvania have to swear that they’re American citizens. They also must provide a birth date and address, and are asked to provide either their driver’s license or state ID number or the last four digits of their Social Security number.

A person who doesn’t provide those numbers can still register to vote, but they have to bring some form of ID to their polling place the first time they vote in person, as is the case for any person voting at a new location for the first time.

If they vote by mail, they are required to provide their driver’s license number or non-driver state ID number. If they don’t have a state ID, the person can provide their Social Security number plus a copy of their signature.

If a voter doesn’t provide proof of ID when they apply for a ballot, the Department of State sends that voter a notice saying they must provide ID in order for their ballot to be counted. The voter then has six days after the election to do so, and if they don’t, their ballot is not counted.

Though Democrats have often broadly opposed requiring voters to provide identification in order to cast ballots in all cases, Shapiro is somewhat open to the idea.

He told the Philadelphia Inquirer that he is “willing to sit down with folks who are operating in good faith to discuss voter ID,” but that he won’t support “any restrictive measure” that disenfranchises people.

He elaborated on that view in an interview with the Pennsylvania Capital-Star, saying he considers a “good faith” effort to be one “that is focused on expanding voting rights not restricting voting rights. He also indicated he might support some form of expanded voter ID in concert with other measures that make it easier to vote, like same-day voter registration.

Pennsylvania politicians have run afoul of state law in past efforts to require voter ID in all cases. In 2012, then-governor Tom Corbett, a Republican, signed a bill that would have required photo ID in order to vote. It was controversial, and Commonwealth Court blocked the law two years later, ruling that getting a photo ID in Pennsylvania was burdensome enough that requiring one in order to vote constituted disenfranchisement. Corbett declined to appeal the decision.

The Republicans who control the General Assembly have in recent years proposed voter ID laws that were less strict than Corbett’s and allowed more forms of ID to be accepted.

A prominent one, from a failed omnibus election overhaul, would have defined ID as including: a driver’s license or state ID; a signed voter registration card; military documents; photo ID documents issued by a federal, state, or municipal government; or a signed affidavit where a voter could affirm their ID under penalty of law, and include their signature and the last four digits of their Social Security number.

Wolf vetoed that bill, citing the voter ID requirement as well as tighter deadlines for absentee ballot applications. Like Shapiro, Wolf also has since indicated that he might be open to voter ID.

Mastriano’s official campaign website says he supports “universal voter ID,” though there are many ways to actually carry out that policy, and he hasn’t been clear on exactly what he wants the requirements to be.

He has characterized Pennsylvania’s voter vetting process as disordered, saying “you just show up and sign a piece of paper or mail in something with a signature, [and] we don’t even know if it matches anything,” which is a simplification of the process.

90.5 WESA partners with Spotlight PA, a collaborative, reader-funded newsroom producing accountability journalism for all of Pennsylvania. More at spotlightpa.org.