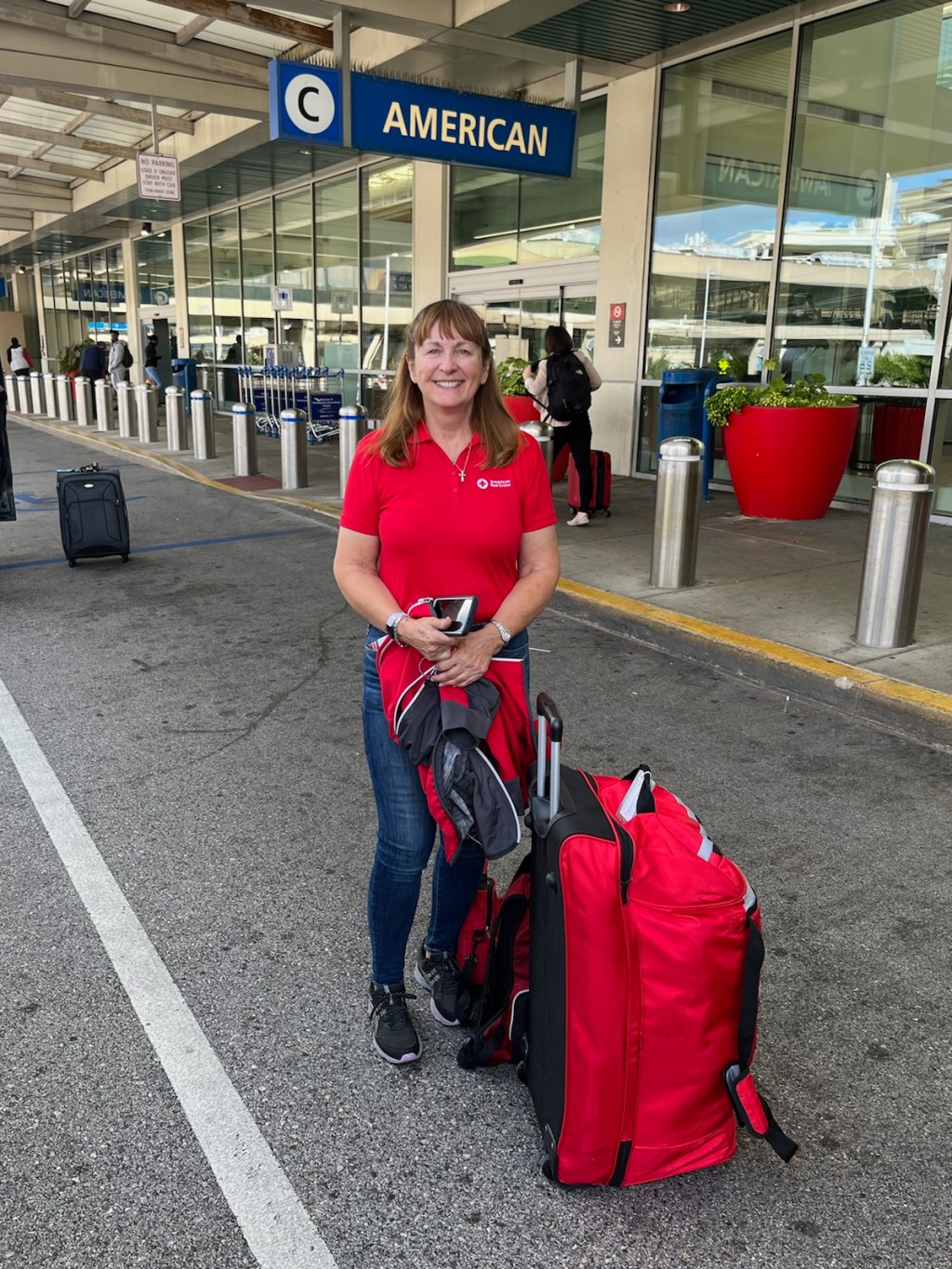 As she waited out the worst of Hurricane Ian in Orlando Thursday morning, Mary Knoll said she couldn’t see much, but she could definitely feel it.

“I’m fine as long as I’m not looking at the curtains. I am in a fairly tall building, and I know that when the wind comes, the building sways,” she said.

“I can see really well from that angle, but with all the water in the window, it’s just a lot of really gray, dark sky.”

Knoll was one of the first Red Cross volunteers Southeastern Pennsylvania Region sent to Florida to assist in relief efforts when Ian made landfall on the west coast of that state on Wednesday and rushed to the east.

According to the Red Cross, an estimated 13,000 people spent Tuesday night at hundreds of Red Cross evacuation shelters and partners, and more than 500 trained Red Cross workers were on site Wednesday to help. Knoll said Thursday morning that she landed in Orlando late Tuesday and was ready for a long stay.

“We were told to get everything we needed to support ourselves, go to our rooms and stay at the hotel,” she said.

“We still have three to four hours before it actually makes that area, so it hasn’t even technically made it to Orlando yet. “We’re just doing meetings and phone calls and trying to make as many plans as possible and get the paperwork done and things like that so that when we get the ‘clear’ so we can leave the hotel, we can go on the ground,” Noll said.

Knoll, of Lower Gwynedd, was among volunteers from the Southeastern Pennsylvania Region of the American Red Cross sent to help after severe flooding in Kentucky in Augustand fellow volunteer Heidi Dumpman of King of Prussia was also scheduled to fly to Florida Thursday night to help out.

Other volunteers from the unit already in Florida as of Thursday included Fred Lehman of Lansdowne, Delaware County, as part of a Red Cross logistics team, and Kenneth Sundar of Trevose-Fisterville in Bucks County as a mass care and shelter worker , and Griffin Schrack of Ambler was scheduled to fly south Thursday to help as a mass care and shelter worker, while volunteer Harry Roosevelt of Pocopson, Chester County, was to follow, the Red Cross said.

Rosemary Troila of Gilbertsville would have been there already if Tuesday’s flight hadn’t been canceled and she was waiting for a new flight Thursday afternoon; once it’s ready, she’ll be on her way to help out for the two-week deployment.

“When I eventually get there, I’ll see what needs to be done. I can go around and assess the houses and note the damage they have done so we can help them financially a little until they get everything livable,” she said.

“And then I’ll be working in shelters, listening to people, comforting people, making sure they have blankets and pillows, food, and trying to make it as comfortable as possible. It’s kind of hard when you’re lying on a bed.”

Knoll said Thursday morning that she’s already seen “a lot of the same faces” from fellow Red Cross volunteers since arriving. She added that in 17 years of volunteering, she has participated in about 40 disaster relief operations.

“It will be busy. We have at least 100 vehicles coming into the area from all over the country and they will be trying to make sure we can feed and deliver supplies to everyone,” she said.

Part of her job is to work with mechanics to check these vehicles and make sure they’re properly equipped and maintained, and then service them when they encounter debris on the street.

“It’s hot, damp, we’ll be outside under a canopy. It will be uncomfortable, but we all know that,” she said.

“We’re in a nice, warm, dry hotel right now, but that could change in a day. We don’t know where we will be,” Noll said.

As damage reports come in, Knoll and her team will deploy wherever needed, checking delivery vans and food trucks delivering food to shelters, community centers, churches and neighborhoods as cleanup begins. Troilo said she has been a Red Cross volunteer for about four years and has been deployed as far as Texas for previous hurricanes, and is eager to give back as much as she can by receiving help from the Red Cross after she was in an accident about 20 years ago.

“Just compassion and empathy for what these people are going through. I went to school to be a counselor, so it helps me a little bit to be able to remove my emotions from the situation,” she said.

“They don’t know how they’re going to do it. They lost everything. They say: “I haven’t seen my home, I don’t know if I will survive,” people are afraid. They lose everything, so you have to empathize,” said Troilo.

How can residents of our district help? Donating blood can help, too can be scheduled onlinebut the best way is always donate directly to the Red CrossNoll said instead of trying to send anything to anyone in the area.

“When you buy in bulk, it’s a lot cheaper and you can control where things go in and where they go. We are very careful with all donor dollars,” she said.

And like Montgomery County learned from Isaiah in 2020 and Ida in 2021the Northeast is not immune to tropical storms and hurricanes, as Troila said she saw firsthand while working at the shelter at Norristown High School just over a year ago.

“I couldn’t get to the shelter when they opened because I have to cross the Perkiomen and it was all flooded. And then I talked to people who were still in their homes but trying to clean up, and we provided buckets and cleaning supplies for people to clean their homes,” she said.

“You think that you have everything ready and that nothing will ever happen to you. And here the trouble is like a slap. Saying, “Wow, I just lost everything.” How do I get it all back?” You cannot become absorbed in objects and material things. You just have to be grateful for your life and that you lived it,” Troilo said.

The Red Cross offers online and face-to-face training in all aspects of emergency preparedness, and if you haven’t already, readers can act now to be prepared for the worst.

“Our saying is, ‘Make a plan and be ready,’ because when that happens, people are expected to be ready to be self-sustaining within 72 hours. “It often takes about 72 hours to fully roll out and get everyone accounted for and up and running,” Knoll said.

To donate to help in Florida or elsewhere, visit redcross.orgcall 1-800-RED CROSS or text REDCROSS to 90999 to make a $10 donation.