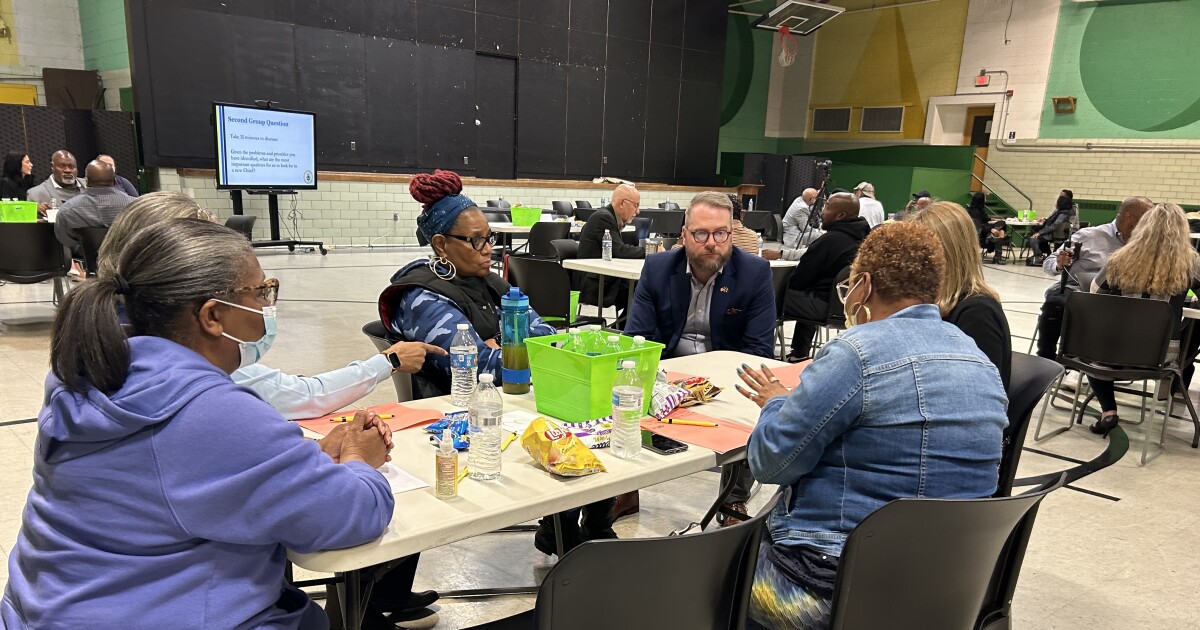 Pittsburgh Mayor Ed Gainey held a town hall in Homewood Thursday night to hear residents’ thoughts on what’s going on they are looking for a new police chief.

Former Police Chief Scott Schubert left the bureau in July to take a job with the FBI. In the meantime, former Deputy Police Chief Thomas Stengrecki is serving as the police chief.

Breaking into small groups, attendees discussed the need for a new chief who would take diversity seriously both in hiring new officers and in policing.

“They see kids hanging on the corner, and it’s somewhat of a cultural norm,” Hill explained. “But [police] see it as a bunch of chaos, confusion, they’re getting ready to get into trouble.’

Hill was one of several residents Thursday calling for someone who lives in the city to become the new police chief.

According to Vice Mayor Jake Pawliak, the new police chief will have to live within the city limits, unlike most officers.

This, however, adds some restrictions to the search. Gainey said many officers who would make good candidates for chief have homes outside the city and would not want to relocate for the position.

If he were able, the mayor said Thursday, he would hire former Pittsburgh Police Chief and Chief of Staff Eric Holmes, a member of the mayoral search committee, to serve as the new police chief.

Holmes, however, lives out of town and left the bureau in April to serve as police chief and director of security at Duquesne University.

Thursday’s meeting was the fourth in a series of public engagement meetings on the police chief search. Gainey said neither group had a clear consensus on whether residents would prefer an employee already with the department or one coming in from outside the department.

The last time the city selected a police chief from outside the department was in 2014, when then-Mayor Bill Peduto hired Cameron McLay of Madison, Wis., to lead the force.

McLay resigned just two years later after months of controversy and conflict within the police bureau. Maclay faced a a series of bitter disagreements with the police union voting it had no confidence in him shortly before he left.

Upon taking office in January, Gainey promised residents that he would reform policing across the city, with a special commitment to community policing.

The Gainey administration has taken some steps to change the police recruitment process. At a separate meeting at the Community Empowerment Association last month, Gainey announced that the city would relax educational requirements for police recruits.

Previously, the Pittsburgh Police Bureau required applicants to enter the academy with 60 college credits, equivalent to an associate’s degree. The Gainey administration said the decision to repeal the mandate will help the city grow and diversify its force.

Gainey also plans to address gun violence throughout the city outlined police initiatives to restructure certain response procedures. The plan includes expanding the bureau’s crisis response teams, which pair officers with social workers to respond to specific incident calls. Other measures in the “Peace Plan” include the creation of 80 city centers for emergency services and an overdose response unit.

The announcement came hours after Pittsburgh police said a request for staff at North Shore Funeral Home, where gun violence erupted last week, had not been honored.

Two men have since been arrested and charged with attempted murder in connection with the shooting, in which five people were shot outside a service at Faith’s Destiny Church and a sixth was wounded as he tried to flee.

Acting Police Chief Stangretsky said in a statement that the department has initiated an internal investigation into why the officers were not assigned to the church and that disciplinary action will be taken as required.

Ayodeji Young of Homewood said whoever is elected as police chief in the future must commit to holding all police officers accountable.

“When you say you’re a police officer, are you just watching us or everyone?” Yang asked.

Many residents applauded the decision, but also questioned the city’s ability to do so under current police arbitration restrictions. State law requires arbitration panel for disputes involving police personnel, three people must be involved: one appointed by the public employer, one appointed by the representative body of the police officers involved, and a third neutral member.

“A lot of times, officers do get fired, but then they go to arbitration and get back on the job, and there’s nothing the city can do,” Gainey said. “Now as far as I’m concerned, I’ll fire them anyway.”

Gainey said he hopes a new superintendent will be chosen before the end of the year, but doesn’t want to be “in such a rush to make the wrong decision.”

“Of course we want to stick to that schedule,” Gainey continued, “but if that happens because of various contingencies and we have to improvise, we will.”

The city is working with a search firm to recruit candidates for the position, but has not yet begun accepting applications.

Another search of the police chief’s town hall will be held online on Saturday. Residents can also share their thoughts with the city through a public survey.