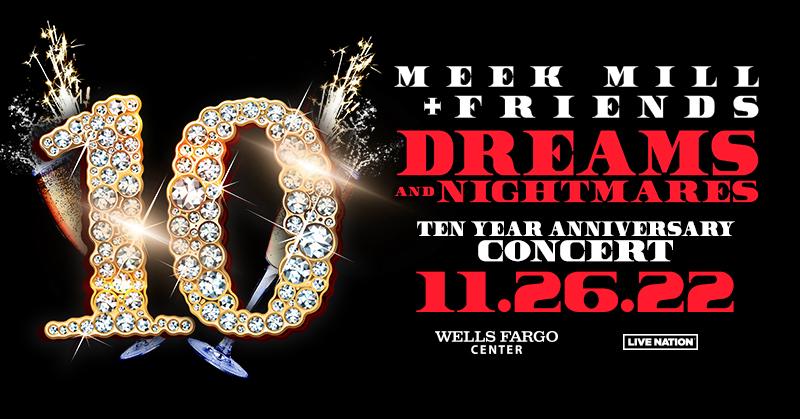 Mill, a Philadelphia native and Grammy-nominated musician, entrepreneur and advocate for criminal justice reform, has announced a special homecoming concert at the Wells Fargo Center over Thanksgiving weekend on Nov. 26 to celebrate the 10th anniversary of his debut album, Dreams and Nightmares. Tickets for this Philadelphia-only Meek Mill + Friends Dreams and Nightmares 10th Anniversary Concert go on sale November 2nd at 10am at WellsFargoCenterPhilly.com.

Mill recently performed the single Dreams and Nightmares at Lincoln Financial Field before the Eagles’ sold-out victory over the Dallas Cowboys on October 16, Sunday night.

Released on October 30, 2012, Dreams and Nightmares debuted at No. 2 on the Billboard 200, selling 165,000 copies in its first week. The album consists of works by Drake, Rick Ross, Mary J. Blige is fueled by hip-hop classics like “Amen” and the album’s intro, “Dreams and Nightmares,” which have been certified Gold and Platinum, respectively, by the Recording Industry Association of America. 10 years later, the timeless hip-hop anthem has become a hit in clubs and arenas, topping the charts with over 650 million streams.

Robert “Mick Mill” Williams is a Grammy Award-nominated recording artist, entrepreneur and criminal justice reformer from Philadelphia, Pennsylvania who has gone from being Philadelphia’s hottest underground rapper to one of the world’s preeminent music artists. He has released many smash hit studio albums and singles including ‘Ima Boss’, ‘Dreams and Nightmares (Intro)’, ‘All Eyes on You’ and ‘Going Bad’ among many others.

He also co-chairs the REFORM Alliance, which was launched in January 2019 to advance criminal justice reform and eradicate outdated policies that perpetuate injustice in the United States. He collaborated with JAY-Z, Michael Rubin, Robert Kraft, Robert F. Smith, Clara Wu Tsai, Laura Arnold, Michael Novagratz and Van Jones to found the organization. In addition, Mill is a co-owner of sports apparel retailer Lids, the largest retailer of headgear and licensed sports merchandise in North America. Mill is also the CEO of Dream Chasers, his music label, which he founded in 2012 and named after his mixtape series.