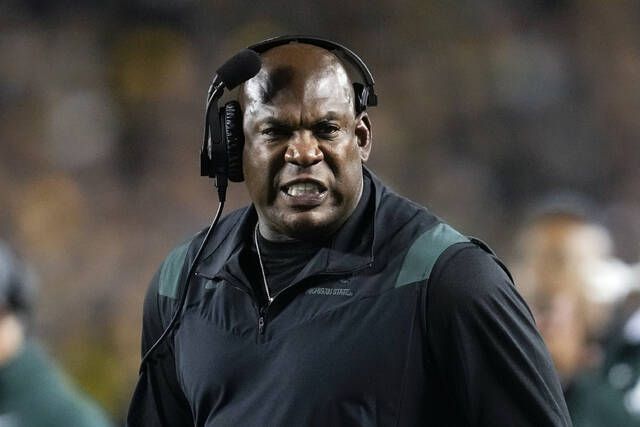 ANN ARBOR, MI. — Michigan State has suspended four players for their roles in roughing Michigan players in the stadium tunnel after a game was lost.

Brawls broke out in the Michigan Stadium tunnel after the fourth-ranked Wolverines beat the Spartans 29-7 on Saturday night. Posts on social media showed Michigan State players pushing, punching and kicking Michigan’s Ja’Dan McBurroughs in and near a hallway that does not lead to either locker room. The video shows Brown, Grose and Young making out with McBarrows.

McBarrows and defensive back Jamon Green walked up the tunnel, walking alongside the Spartans, after the game as much of the Michigan team waved to them from the field after defeating their in-state rivals for the first time in three years.

Michigan coach Jim Harbaugh said Saturday night that one of the players, who he did not identify, may have a broken nose. A post on social media Sunday showed a Wolverine look-alike Greene being roughed up by the Spartans.

In another post, Green is surrounded by police while yelling through the tunnel at Michigan State players.

“Two of our players were attacked,” Harbaugh said. “I saw on one video. 10 for one. It was pretty bad. It should be investigated.”

University of Michigan Deputy Police Chief Melissa Overton said the investigation is being conducted in partnership with Michigan State Police, the athletic department and the Michigan State football program.

“The investigation is taking some time,” Overton said Sunday.

Tucker said the school is working with law enforcement, Michigan State and Michigan campus administration and the Big Ten Conference to assess what happened, including identifying other players involved in the altercation and contributing factors.

“The initial suspension of the student-athletes will remain in effect pending the conclusion of the investigation,” Tucker said. “The health and safety of our student-athletes, coaches, staff and the Spartan community remains our top priority. You have my promise that we are committed to fairness, transparency and accountability, and that we will continue to take appropriate action in this matter.”

“I am deeply saddened by this incident and the unacceptable behavior of members of our football program,” Stanley said in a statement. “On behalf of Michigan State University, I offer my sincere apologies to the University of Michigan and the student-athletes who were injured.

“There is no provocation that could justify the behavior we see in the video. Rivalry can be strong, but it should never be brutal.’

The Big Ten said in a statement: “The conference is currently gathering information, will carefully review the facts and will take appropriate action.”

As Tucker walked off the field and into the tunnel at one point Saturday night, a fan touched his head, and the coach responded by pushing the fan’s hand away.

It was the second straight game at Michigan that involved an altercation in the long, narrow tunnel that runs from the locker room to the field.

Heated words were exchanged and Michigan State players said Pennsylvania players pelted them with peanut butter and jelly sandwiches as the teams headed to the locker room at halftime of a touchdown drive that the Wolverines ended up winning 41-17 on Oct. 15.

Harbaugh said Franklin acted as the “instigator” and claimed the Nittany Lions stopped in the tunnel to prevent his team from gaining access to their locker room.