Todaypennsylvania.com
Home Entertainment Myles Garrett is back with the Browns charged with speeding after the... 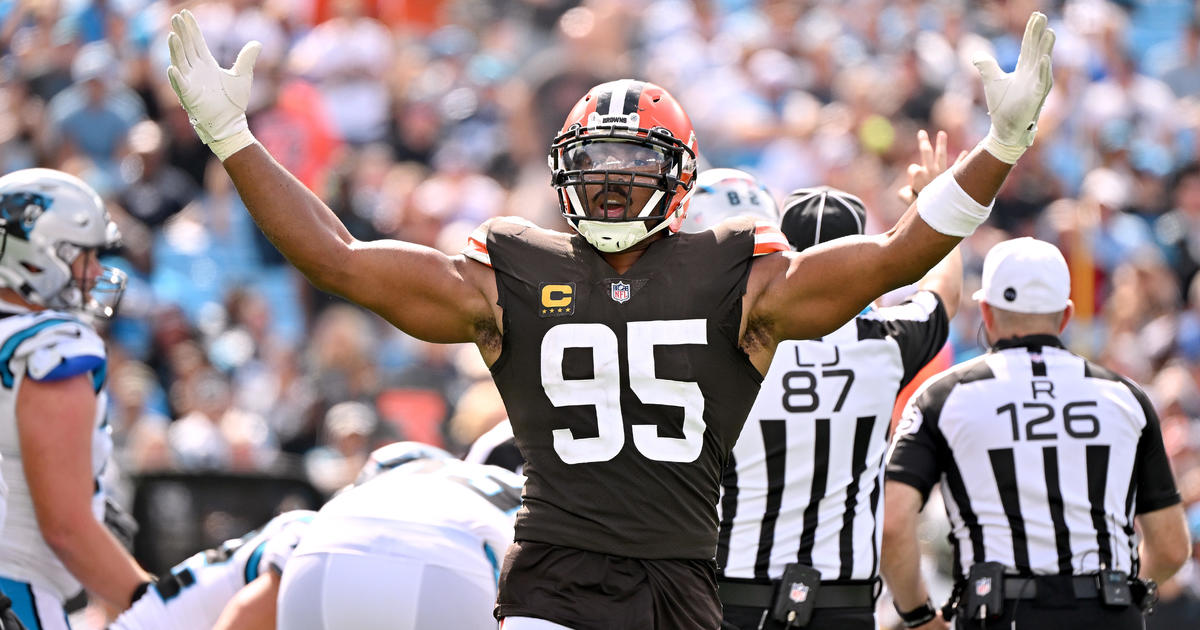 BEREA, Ohio (AP) — Cleveland Browns All-Pro Myles Garrett returned to team headquarters but did not practice Thursday while recovering from injuries suffered in a car crash earlier this week when police said he lost control at speed on a rural road. the road.

On Monday, Garrett drove his Porsche off a hilly road near his home, flipping the car and hitting a fire hydrant. The defender suffered a dislocated shoulder, a strained biceps and several cuts and bruises from the crash.

He has not yet been ruled out for Sunday’s game against Atlanta. Garrett visited the team doctors for an evaluation. He was not with his teammates during the part of the training session open to the press.

Also Thursday, the Ohio State Highway Patrol cited Garrett for speeding, saying he was going 65 mph in a 45 mph zone.

According to the crash report, Garrett, who had a female passenger in his car, told the officer he accelerated up the hill when he saw a vehicle coming in the opposite direction, but did not make any maneuvers to avoid the crash. .

The officer said Garrett could not remember exactly how he left the road.

A witness at the scene told the highway patrol that “they flew over a hill, took off, took out a fire hydrant and flipped over three times.”

Garrett and his 23-year-old passenger were taken to Akron General Hospital for treatment. The traffic police reported that the passenger received a minor head injury. They were both released a few hours later.

Garrett has a history of speeding. He was ticketed last year in Medina County for going 120 miles per hour. In the second case, he paid a ticket for speeding at 99mph in a 70mph zone.

Coach Kevin Stefanski said Wednesday that Garrett will be thoroughly evaluated before a decision is made on his playing status. With 14 games left in the season, Brown will likely take a cautious approach.

Along with Garrett, the Browns (2-1) have several other quarterbacks dealing with injuries as they prepare to face the Falcons (1-2).

Over the past two days, several of Garrett’s teammates and coaches have expressed gratitude and relief that he was not more seriously injured.

Cornerback Greg Newsome II spoke with Garrett after his return.

“He looked happy to see us all again.” – said Newsom. “I just told him, ‘I love you.’ I’m glad you’re here.’ We will definitely be there for him no matter what he needs and can’t wait for him to get back healthy.”

Pro Bowl guard Joel Bitonio, the team’s captain, said the Garrett incident is a reminder to all players to be careful.

“First of all, we’re just happy that he’s OK for the most part,” Bitonio said. “He was here today so we got to see him a bit. Coach Stefanski just stressed to us that we have to be safe driving, we have to be safe on the road and things like that.

“You just want to protect yourself. It’s really just about protecting yourself and the people around you in general. But we’re just happy he’s back in the building and hopefully he’ll be ready to roll here when he feels good.”

The Browns, who had a long layoff after beating the Pittsburgh Steelers last Thursday, are dealing with a lot of injuries on their defense. End Jadeveon Clowney (ankle), cornerback Denzel Ward (back, ribs), linebacker Jeremiah Owusu-Karamoa (groin) and Taeven Bryan (hamstring) are also on the injury report.

Ward and Owusu-Karamoa took part in individual drills during the early part of Thursday’s practice.