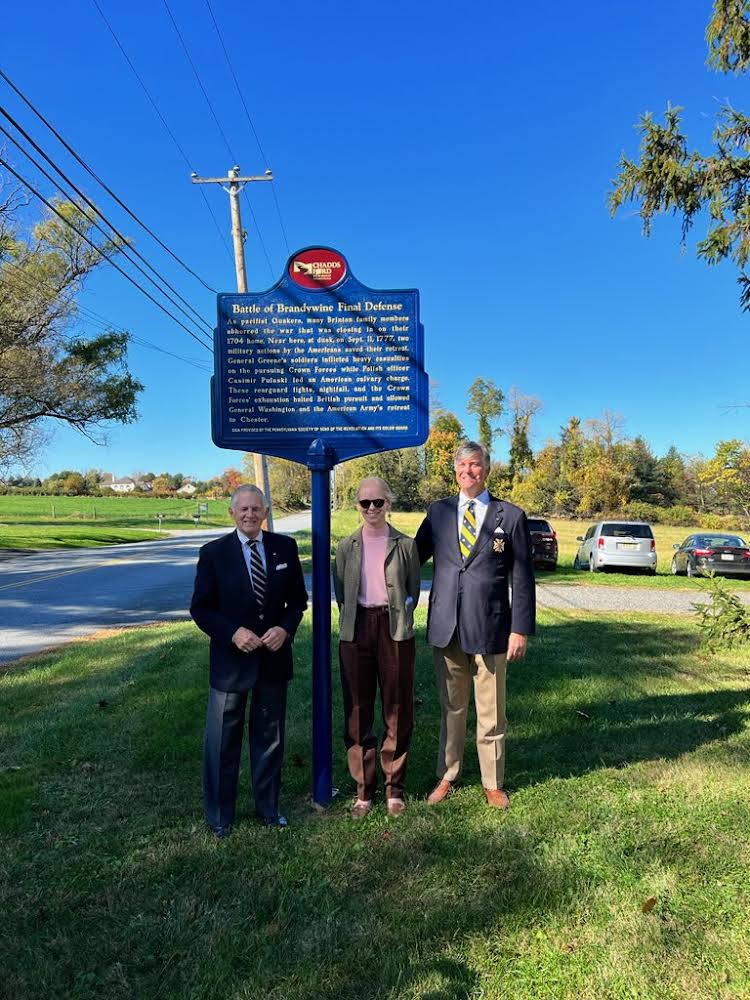 Brinton House 1704 is pleased to announce the successful dedication ceremony of its new Brandywine Battlefield marker on October 29, 2022 with the assistance of the Pennsylvania Society of the Sons of the Revolution and its Color Guard.

On September 11, 1777, near the Brinton House 1704 in Chadds Ford Township, Delaware County, American soldiers under General Greene inflicted heavy casualties on the pursuing Crown forces as the Continental Army retreated. Nearby, Polish officer Casimir Pulaski led an American cavalry charge against the Crown forces in a last-ditch defense at the end of the day-long Battle of Brandywine.

These heroic actions are now commemorated with a new Brandywine Battlefield marker, one of 15 such markers presented by the Pennsylvania Society of the Sons of the Revolution and its Color Guard to help Americans today understand and appreciate the sacrifices made by their ancestors in this momentous conflict 245 years ago.

“Our society has agreed to fund this project to educate the public about the Battle of Brandywine,” said Peter Morgan Adams, Color Guard historian. “By funding the cost of 15 historically accurate signs detailing the events of the battle – and distributing the signs in the 15 municipalities that share the battlefield footprint in Delaware and Chester counties – we believe our mission to honor and perpetuate the ideas, courage and sacrifice of our ancestors is well are served.”

Adams went on to say that this project is the result of a great collaboration between two county leaders, 15 communities, 15 historical societies and many individuals interested in accurately preserving the history of the Revolutionary War in our region, and that there is no better example of a successful public-private partnership anywhere in America.

The markers, taken together, act as landmarks for a tour of the battlefield. This Battle of Brandywine Last Stand marker at 21 Oakland Road, West Chester, PA is the ninth of 15 proposed markers highlighting significant actions during the Battle of Brandywine. The location of the marker, the 1704 Brinton House, is one of the oldest Quaker houses in the United States, a National Historic Landmark, and one of the original 14 houses that stood on the Brandywine Battlefield.

The placement of this marker was directed by the Task Force Brandywine Steering Committee, which is following the interpretation plan developed by the US Battlefield Defense Program.