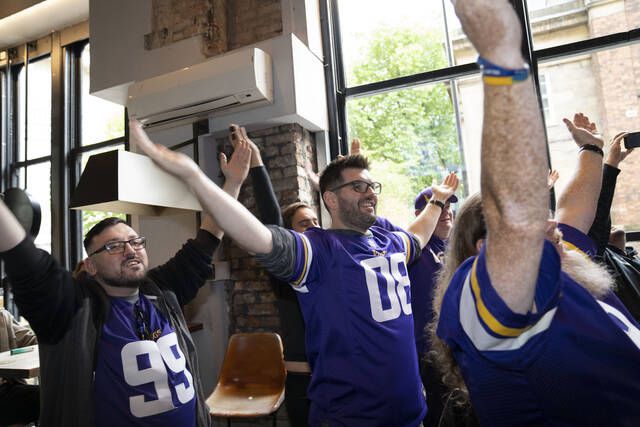 However, Sebastian Randazzo is optimistic. A young Englishman who started a Jets fan club said interest in the NFL is “absolutely growing”.

“Hopefully we’ll continue to see it grow and teams make their presence known in the UK,” he said on Sunday. “It’s great for us fans.”

Half a dozen teams are aggressively targeting those fans after the NFL split the marketing rights in Britain. They sign commercial deals and hire local media personalities to expand their fan base and generate international revenue.

The Jacksonville Jaguars are the UK’s unofficial home team – and they intend to keep that status – but now they face competition.

The San Francisco 49ers have signed a deal with TalkSport radio station to broadcast games. The Jets have struck a deal with British menswear brand Charles Tyrwhitt.

Nor are they just focused on London. The Chicago Bears held youth clinics in eight cities this summer — including Wales and Scotland. The Minnesota Vikings sent their mascot and cheerleaders to Manchester ahead of their game against the New Orleans Saints on Sunday at Tottenham Hotspur Stadium.

“There are many advantages. This is just the beginning,” said Martin Nance, executive vice president and chief marketing officer for the Vikings.

Jaguars, however, are keen to maintain their top dog status. They hired an NFL executive to oversee the relaunch of their brand in Britain. The Jags have played in London almost every year since 2013 and will face the Denver Broncos on October 30 in the first game of a three-year deal at Wembley Stadium.

The fight intensified ahead of the three games in London in October. All of this is the result of the NFL launching its international “home marketing zone” program. Eighteen teams have been awarded the rights – in different countries, eight in total – to five-year contracts, during which the teams can sell sponsorships and merchandise, build their “global brands” and attract new fans.

The other seven countries are Australia, Brazil, Canada, China, Germany, Mexico and Spain. Some teams have rights in more than one country, such as the Miami Dolphins with Brazil, Spain and Great Britain. International expansion was one of the reasons the NFL added a 17th game to the schedule.

“For us, those markets are underserved,” said Alex Chung, director of marketing for the 49ers, who own rights in the U.K. and Mexico. “Now that we have the rights there, we can do a lot more with it. We can grow this fan base much more actively. There really is a net plus, but we have to invest to achieve that plus.”

The teams do not disclose budgets or revenue projections, but Chang said the team has made a “significant investment” in the initiative.

The 49ers, who play in Mexico City on November 21 against the Arizona Cardinals, are part owners of Premier League club Leeds and plan to host their first official fan party in the northern city during a game this month. They canceled the previous one after the death of Queen Elizabeth II.

“In this (five-year) period, we will also aim to play in the UK,” Chang said.

It is difficult to gauge the potential returns, but sports economist Victor Matheson of the College of the Holy Cross in Massachusetts said it is instructive to consider the success of the Premier League in the United States. The league signed a six-year deal with NBC worth more than $2 billion despite not playing regular-season games in the U.S.

“The NFL would be thrilled to make the same kind of inroads into the UK that the Premier League has in the US,” Matheson said, adding that the league is looking overseas because it has “pretty much entered the American market “.

In 2013, the Jags were given permission to market in Britain and the team upped the ante with a new deal at Wembley. That’s because the Jags — not the NFL — will be running the game, handling everything from catering to bargain hotel packages. For the fans, it will look and feel like a real “home” game.

“We took a chance,” said Maria Gigante, who left the NFL in January to become the Jags’ vice president of UK operations. “We slightly increased the price of tickets. We’ve taken on hospitality…and exceeded our goals.”

Even with exchange rate fluctuations, playing at Wembley is “significantly more profitable” than playing in Jacksonville, said Johnson, the chief operating officer.

The Jags have a history with Wembley, having played all but one of their eight games in London there. Jags owner Shad Khan, who also owns Premier League club Fulham, even tried to buy the stadium from the FA. The team is currently spending money on capital improvements to Wembley.

There is a conference affiliation with the NFL, and the teams cooperate at times, Gigante said, but it’s a competitive environment.

“As for the other teams, they are very focused on global expansion and dipping their toes in the water in different areas. For us, it’s about maximizing opportunities in Great Britain, it’s about being Team Great Britain.”