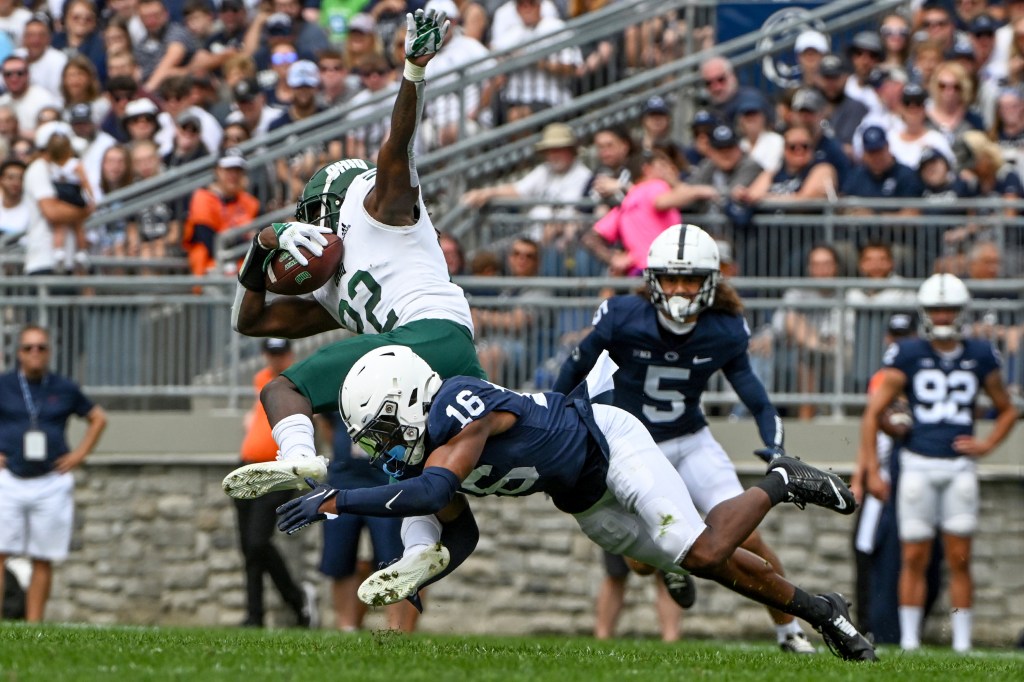 Penn State safety J’Air Brown earned another accolade Tuesday for his performance at Auburn when the Football Writers Association named him the Nagurski National Defensive Player of the Week.

Brown, a 5-11, 202-pound senior from Trenton, N.J., had five tackles (four solo), one sack, one forced fumble, one interception and one quarterback hurry in the Nittany Lions’ 41-12 rout of the Tigers.

He was named the Big Ten Defensive Player of the Week on Monday. He led the nation with six interceptions last year.

“It’s about time,” Brown said after the game about his first interception of the season. “I didn’t get much action at all. Finally someone threw it to me and I had to play. I will continue to do so.”

“The first two games we played (against Purdue and Ohio), the offensive schemes kind of limited our bases,” Brown said. “They won the ball quickly, not trying to go upfield, not really trying to check us and playing a safer way.

“Auburn came out today and they wanted to test their athletes against ours. We were able to make some plays.”

Manning disguised himself as “Chad Powers” and attended Penn State’s tryouts with the blessing of Nittany Lions coach James Franklin. He participated in drills and threw several passes to students who tried out without knowing his true identity.

Lions offensive analyst Danny O’Brien, a former Maryland quarterback, ran the drills and didn’t joke around until Manning took off his wig and latex mask.

“We have a pretty good relationship with the Manning family,” Franklin said. “When they reached out, we obviously wanted to be a part of it because I think Eli did a great job with it all.

“It turned out. It was something that I thought was unique and different, but it also wasn’t going to cause us any distractions or problems.”

During Manning’s visit to Pennsylvania, he addressed the team and surprised punter Barney Amore by telling him the Lions had offered him a scholarship.

“If you can have someone like that on campus and get the message out,” Franklin said, “it was a good opportunity.”

Hammer time: A Penn State defensive player would bring a huge hammer onto the field each game as a reward for making the hardest hit in the previous game, Franklin said.

Defensive coordinator Manny Diaz created the award in his first season with the Lions.

“That’s what Manny brought with him (from Miami) and wanted to do,” Franklin said. “Where it came from, I don’t know. Maybe Manny did it in his wood in the basement. I’m not sure of the details.’

“We’re just trying to enhance the physical aspect,” he said, “and emphasize toughness.”

On average, more than 4 million viewers watched the game. It was Penn State’s first appearance on CBS since 2000.