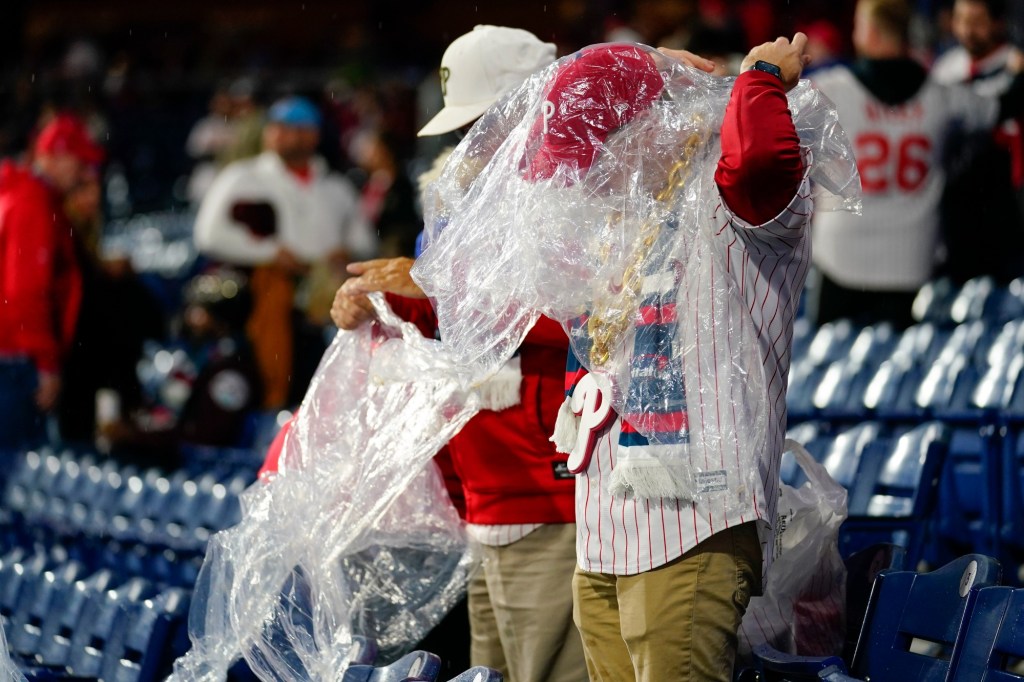 PHILADELPHIA — For Philadelphia’s first World Series game in 13 years, the Phillies and Mother Nature went a year better to bring back some soggy memories Monday night.

Another Monday night in October 2008, it took a little monsoon to postpone Game 5 of the World Series between the Phillies and the Tampa Bay Rays.

One game away from the title and with ace pitcher Cole Hamels on the mound, the Phillies were leading when a storm off the coast decided to approach. A light rain early in the game turned into heavy rain, but the game continued. It became official in the fifth, but then the Rays tied the game 2-2 in the top of the sixth, and the game was called due to unplayable conditions shortly after, with the Phillies yet to bat in the bottom of the sixth.

Despite the rules that required the game to return to the bottom of the fifth with an official score, commissioner Bud Selig reversed his rulebook and said the game was suspended. After a few wet days, the Phillies won and clinched the series.

That’s why current commissioner Rob Manfred didn’t hesitate to call the game before it even started, even though it was a splash at best at the time. Manfred said, “We can see on the radar what’s coming.”

So the series was pushed back.

“It affects both teams,” Baker said. “You just have to turn it off, get a good night’s rest and … I’ve heard it’s hard to book (a restaurant) anywhere, it’s full. But you hope the guys can book seats, eat, be with their families and get ready for the game tomorrow.

“It’s part of the game. You can’t control the weather, so you just deal with it,” Baker added. “I think it’s harder to wait and then turn it on, because waiting to play, I always felt like you were more tired, you burn energy and you don’t know when and if you’re going to play. Now we know we’re not playing, we’re just treating it as a day off.”

Despite the Phillies getting historic production from Bryce Harper this postseason, the team in the league, accustomed to having a designated hitter, is struggling. On Monday, Baker homered for the third DH in as many games and David Hensley’s name appeared on the roulette wheel.

Game 1 brought in Trey Mancini, who is 0-16 this postseason. The midseason acquisition from Baltimore was undone with two out in the 10th inning to get Aledmys Diaz to make the final out. Diaz started Game 2 in left field so Jordan Alvarez could return to his more natural spot at DH.

In Game 3, Alvarez would return to left with Hensley in the seventh as the DH. The rookie made his major league debut on August 27. The 26-year-old batted .345 with a homer and five RBIs in 16 regular season games. He made two ALDS appearances.

“I like his approach, his aggressiveness and his overall fight to give you a good shot,” Baker said. “He’s going to foul some pitches. He will bring some others into play. He uses the whole field.”