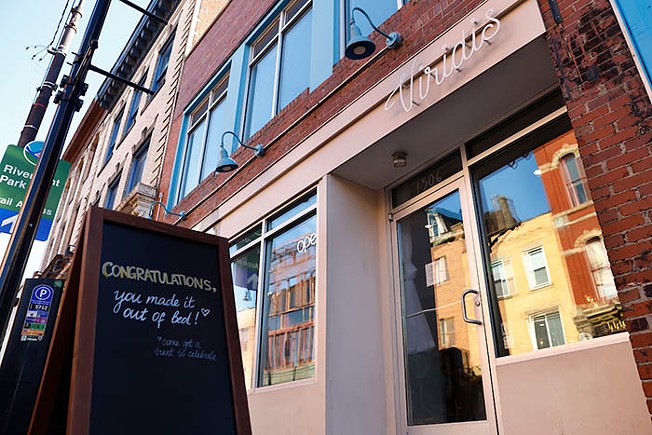 Is the closure of these three key restaurants, especially in such a close sequence, a sign of the collapse of the city’s vegan scene, or just a bad time?

Exterior of the former location of Viridis in the southern part

Viridis was the first to announce the closure. A Post March 15 on the South Side restaurant’s Instagram page announced that it will continue service until the end of March, stating that “with a heavy heart we must inform you that at the end of the month we will close our shop window forever. This decision was extremely difficult to make because we loved every minute of this trip, but we know it is the right decision for us and our team. ”

B52, a favorite place where all vegan food is served in Mediterranean style, was nearby announce that it will close in April. The B52 was inaugurated by Omar Obuheile in 2016 and has been successful from the start. A favorite place for many, including non-vegans, the B52 was usually filled for a constant dinner crowd until the pandemic came.

Obuheile says that while B52 was busy during the pandemic, switching to pick-up and delivery options as the owner of several businesses, the stress of the workload began to cover it about six months ago.

Obuheileh also went to Instagram to announce the closure of the business, and in a post he detailed how his mother’s death contributed to the decision to close B52 and focus on the quality of his own life.

The last was Reed & Co., which opened in 2016 to announce its closure. Lawrenceville’s place was known for its things that quickly grab and go, such as salads and wraps, as well as large items such as the Impossible Hoagie. Like B52, they were also able to withstand the pandemic by switching from lunch, only they offered a reception window through which customers could still order and take food without going to a restaurant.

While the sudden closure is a cause for concern, other local vegan eateries seem healthy in terms of recovery after the pandemic. Kate Laski, owner of Apteka, a hit restaurant and bar inspired by Eastern European flavors, says the Apteka team is holding on and is optimistic. The pharmacy opened in 2016 after working as a pop-up night.

Grace admits that even though the restaurant is working well, there are still issues with owning a business during a pandemic.

“Running a small business is hard to start, but the pandemic has added many additional factors that can really change the work from week to week,” says Grace, adding that although they are “very cautious” with COVID-19’s impact in space, “sometimes a few people will get sick every day other than the usual things like rest and requests for rest ”.

“You need to be more mindful of your plans and set smaller and more progressive goals because it’s harder to predict what this week will look like,” she continues. “Also, to repeat what is always in the news – we have a lot of supply problems. Some of the farmers we work with last year found it very difficult to get certain seeds, things like metal products will be missing for weeks or months, mushrooms will be hard to find for a week or two – many minor problems mean less predictability and inappropriate quality of ingredients ”.

Onion Maiden, a popular vegan heavy metal-themed restaurant in Allentown, has been attracting customers to its brick-and-mortar store since opening in 2017. They are also active in the farmers market, regularly opening a booth at Bloomfield Farmers ’Market, where they serve pastries, donuts and other ready meals.

Onion Maiden remains open, but, like Apteka, has also faced its own challenges. “Personnel is my biggest problem,” says Onion Maiden owner Diana Dingo Ngo. “As a small business owner, it is very difficult to find a balance between work and life. The amount of work and time you put into it is a big sacrifice. I often think and ask myself, “Is it all worth it with my public life, my mental, physical health, and my marriage?” The answer is no, but I continue to do what I do because I feel a duty to my family at Onion Maiden and a love for them and the restaurant. ”

Onion Maiden also adapted during the pandemic by switching to a nursing-style menu. Now that everything is reopening and many restaurants are returning to dine, Ngo says the business is going well. To ensure the safety of visitors and staff, both Apteka and Onion Maiden still have requirements for masks and vaccines for guests.

And if you missed the last day of service at B52, don’t worry. Obuheileh says he has now called the business temporarily closed and will make several pop-ups over the next few months. He also owns Allegro Hearth Bakery, a vegetable bakery and sandwich shop that still operates.