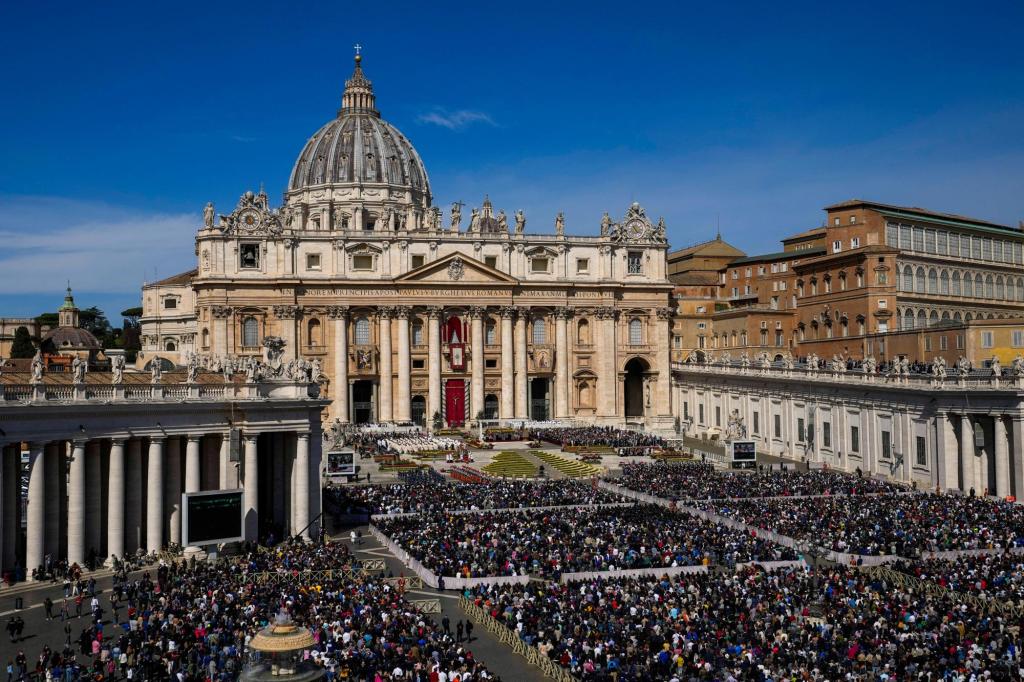 VATICAN CITY (AP) – On the day that is supposed to be the happiest day of Christianity, Pope Francis made a painful request for peace in the “senseless” war in Ukraine and other armed conflicts raging in the world, and referred to the “troubled” risk nuclear war.

“May there be peace for Ukraine, ravaged by the war, so severely tested by the violence and destruction of this brutal and senseless war in which it was involved,” said Francis, speaking from the central balcony of St. Peter’s Square.

The pontiff has just finished celebrating Easter Mass in a square filled with worshipers for the first time since the pandemic began in early 2020. Applause erupted from many of the 50,000 people in the square and on nearby Avenue when he mentioned Ukraine.

“Please, please, let’s not get used to the war,” Francis asked after condemning “stretching muscles while people are suffering.” Once again, the pontiff condemned the war in Ukraine, citing Russian President Vladimir Putin’s decision to launch an invasion and attack on Ukraine on February 24.

“Let us all commit to asking for peace from our balconies and on our streets,” Franciszek said. “Let the leaders of the states hear the people’s request for peace.”

Clearly referring to the threat of nuclear war, Francis quotes a 1955 declaration by scientists: “Should the human race end, or will humanity abandon war?”

Francis also drew attention to other wars in his speech, known in Latin as “Urbi et Orbi” – against the city and the world.

“Let the conflict in Europe also make us more concerned about other situations of conflict, suffering and sorrow, situations that affect too many areas of our world, situations that we can not ignore and do not want to forget,” said Franciszek.

Among the conflicts cited by the Pope were conflicts in the Middle East. He called for peace and reconciliation for the peoples of Lebanon, Syria and Iraq.

He also called Libya, as well as Yemen, “suffering from a conflict forgotten by all.”

Earlier, the pontiff, who has problems with knee ligaments, was severely lame as he made his way to the altar set up in front of St. Peter’s Basilica. The altar was shaded by a canopy from the shining sun.

Immediately after the Mass, Francis shook hands with the prelate and then boarded a white papal car to roam the square to greet the welcoming well-wishers among the faithful. He waved his hand and stroked the baby’s head, which was handed to him. His smiles while greeting the crowd have been a rare departure recently for the Pope, who has used many of his speeches in recent weeks to publish gloomy denunciations of the war in Ukraine.

In London, meanwhile, Archbishop of Canterbury Justin Welby called on Russia to declare a ceasefire and withdraw from Ukraine. The leader of the Anglican Church said that Easter is a time of peace, not “blood and iron”.

Noting that in the Eastern Orthodox Church, and then much in Russia and Ukraine, Sunday marks the beginning of Holy Week – with Easter on April 24 – Welby called on Russia to leave Ukraine and begin negotiations.

In an unusually sharp political remark, Welby also condemned the British government’s recent plan to send some asylum seekers to Rwanda as against God.

Warm weather and the easing of many restrictions on the pandemic – including what was a mandatory requirement for most pandemics in Italy in the open air – led to a boom in tourism in Rome, and many visitors flooded the city at the end of Holy Week for Easter.

In Spain this week, believers and secular enthusiasts flocked in large numbers to Holy Week processions for the first time since the pandemic began after most health restrictions were lifted.

Jill Lawless in London and Joseph Wilson in Barcelona contributed.