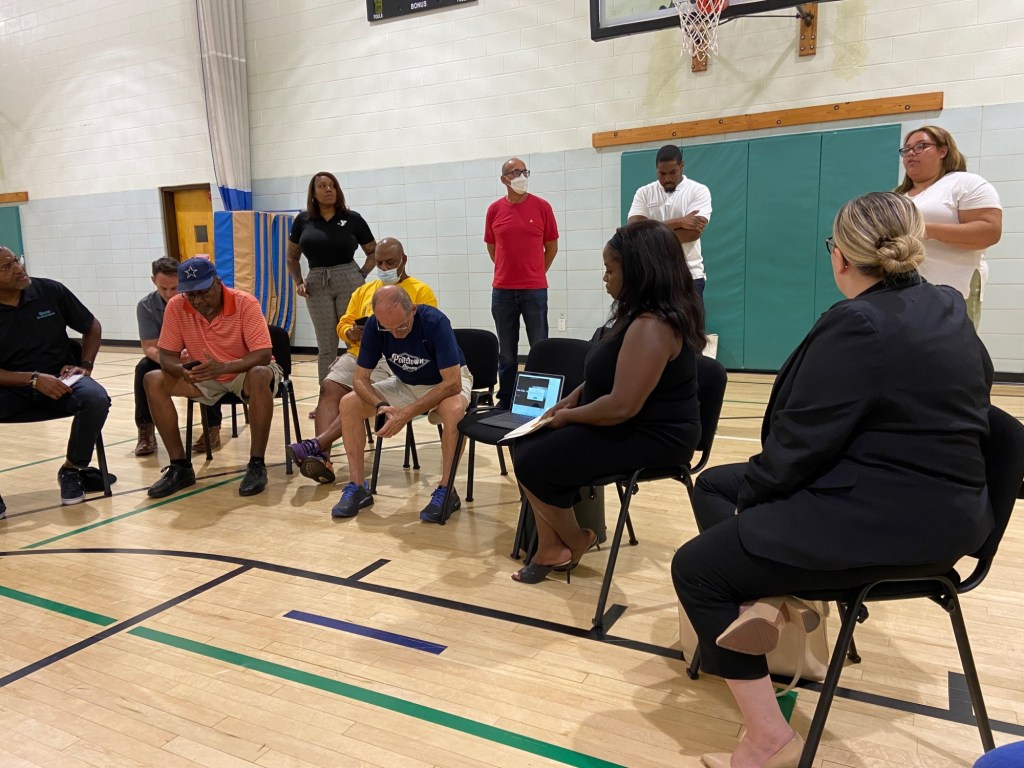 POTSTAWN – After four shootings in the past month, one of them is deadlyefforts are being made to end gun violence in the area.

The first attempt to do so came Wednesday night at the North Adams Street YMCA, where officials from the Y, which runs programs to end the rise in gun violence in Philadelphia, came to Pottstown to see if they could help.

Before presenting something, they listened.

They listened to a group of community leaders and neighborhood elders and activists assembled by the Pottstown NAACP chapter. And it was something to hear.

Among the things they heard is a six-month waiting list for mental health services in the area, an endless wait for people currently in crisis.

They heard how poverty can create an atmosphere of hopelessness that breeds antisocial behavior.

They heard that parents need both help developing parenting skills and support in using those skills.

They learned that there is a lot of distrust in the society towards district institutions and among these institutions themselves.

“During the pandemic, I learned how political it can get, just trying to help people,” said the Rev. Justin Valentine, pastor of Kingdom Life Church on Walnut Street. He gave the example of various agencies and churches competing to provide food for the needy. “What does it matter?” he recalls. “It’s not about work, it’s about life.”

And they learned that kids in Pottstown crave teachers, otherwise they follow social media trends and think “it’s cool to be a shooter.”

“When the mainstream culture doesn’t accept you and doesn’t help you, you create a subculture,” said Chelise Wilkerson.

“I see these kids every day, they don’t know what they want,” said Jocelyn Charles, director of the Ricketts Community Center. “But they live survival style.”

Overcoming these challenges to meet children where they are and guide them to participate in society and be a productive part of society is a difficult task and it will not happen overnight.

“I wish I had a magic potion that would solve the problem of gun violence in Pottstown,” said Kayanna Anderson, community engagement manager for the YMCA of Greater Philadelphia.

The key to success will be recognizing what’s already in place and working in Pottstown and scaling up those efforts, Anderson said.

Carleen D. Crowley, director of strategy and government relations for the YMCA of Greater Philadelphia, said the Y wants to bring in programs that address those needs, but work with existing programs rather than duplicating them. “We’re interested in collaboration, not reproduction,” she said.

There will be at least two more public listening sessions before any program starts, but the core is a series of six workshops on different skills and six mentoring sessions.

To increase participation, those who take part in the program will be paid and receive a free annual membership to the YMCA.

Tentative dates for these additional listening sessions are October 5th and November 19th, but this is subject to change.

Another effort planned to address the issue is a town hall meeting on Oct. 15 at Mount Olive Baptist Church, 240 Mintzer St.

Sponsored by the Montgomery County Teachers Association, “Preserving Our Community Town Hall” will be held from 4:30 to 6:30 and includes a panel discussion. Participating organizations include: Responsible Mothers; Fathers are responsible; Excellent students; Consortium of Black Physicians of Philadelphia, YWCA TriCounty Area, and Teachers Association.