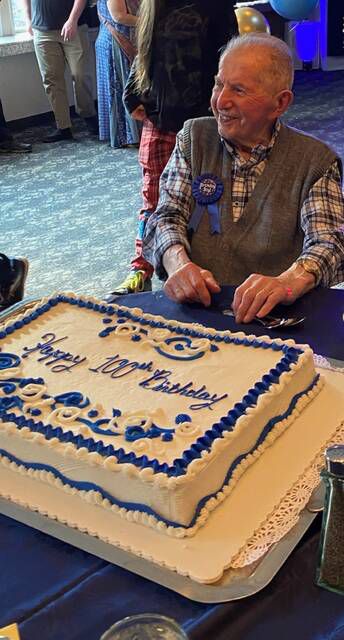 “What an amazing life,” Rabbi Kaplan said as he began his eulogy for the late Saul Cranson, who died early Sunday morning. He was 100 years old.

“Actually, if I’m not mistaken, at least part of this family met because of business,” Kaplan said. “They had a kosher house together, they traveled around the world and to Israel several times. They have supported our first responders in this community and beyond.”

Kaplan said Crenson came to this country from Lithuania “when Jews were the main workers in the garment business.”

Kaplan said, “When I was at a school in Miami, where many of the parishioners were in this business, we had a Shabbat just for them, called Shamata Shabbat.”

Kaplan said Crenson has done our country proud, and he has improved the lives of countless people in our community.

“He was proud of his Jewish heritage and it was always a joy to see him in shul,” Kaplan said. “Jackie’s smile and flair were memorable and Saul admired her. Sheila (Rosenthal, his most devoted caregiver and daughter-in-law) has been his greatest supporter since Jackie left us. His card playing buddies have been close over the years. Saul was always younger than his years. And so his death at the age of 100 came as a shock to everyone who knew him.”

Kaplan said that although this Thanksgiving will be sad without Saul Cranson at the table, it is still a time to give thanks for the full life that Saul gave to God.

“We’re told that before we get to heaven, we can take a few things with us to try to convince our creator to let us in,” Kaplan said. “We can bring our Jewish heritage, all the years we spent in shul, all the bar and bat mitzvahs we attended, all the trips to Israel we took. But we can’t take it with us into the gate. And we can bring our business, the things that people have bought from us, the joy that we have given them, but none of that can come through those gates with us. And of course we can bring our family and friends, but they can’t come with us either. And after we leave all that behind, we will pass through that gate, that Shaarei Shamayim, with only the clothes on our backs. Tachrichim, the cloth shroud we wear at the very end. In Saul’s case, maybe we should have sewn them up, but it’s his soul, his kindness, his generosity, his smile that he brings to these gates.”

The Kaplan added, “Tehi Nishmata Tzrur B’zror Hachaim, may his soul be bound by the bonds of eternal life. May he rest in peace. Amen.”

Cranson’s obituary said he immigrated to America at the age of 7 from Lithuania. He was the youngest of six children. He was a standout basketball player at Coughlin High School, leading the league in scoring as a senior.

He attended the University of Scranton, where he played basketball until World War II broke out. He served overseas in the US Army.

After the war, he was offered other universities to further his education and basketball skills, but decided it was time to work and eventually joined his brother Harry in creating Kranson Clothes.

Cranson was briefly a member of the Wilkes-Barre Barons basketball team.

He was married to Jacqueline Rosenthal for 66 years before her death in 2014.

He is also survived by Sheila Rosenthal, his most devoted caregiver and daughter-in-law, who would not have been able to reach this milestone without her care and diligence.

He had many great grandchildren who were his pride and joy.

His funeral was held Tuesday at Rosenberg Funeral Chapel, Wilkes-Barre, followed by burial in Temple Israel Cemetery, Swoyersville. Shiva was held on Tuesday and Wednesday evenings.