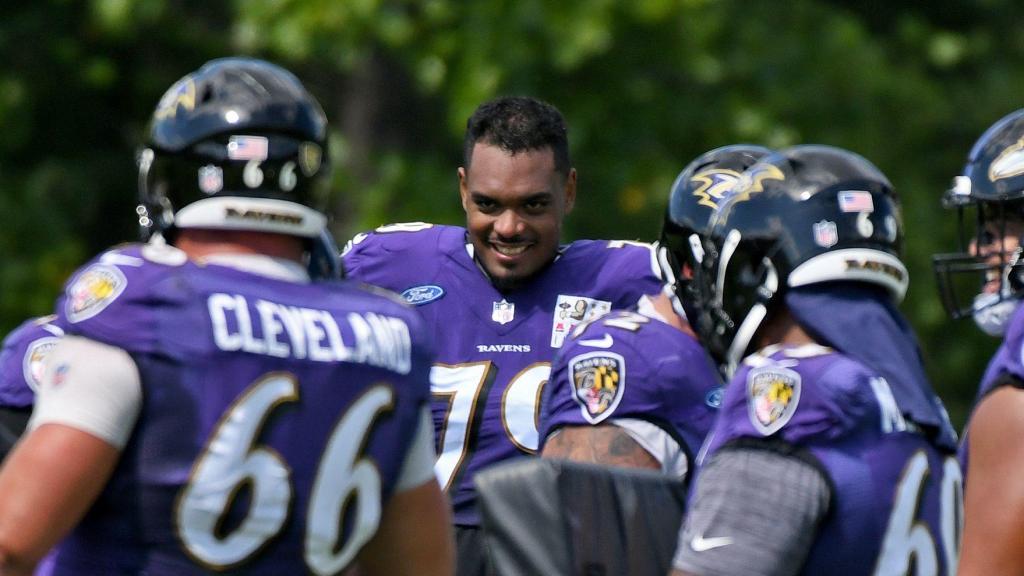 On Thursday afternoon, reporters huddled in the Ravens locker room as television cameras flashed one of the team’s biggest mysteries, and chants broke out: “Ronnie! Ronnie! Ronnie!”

Ronnie Stanley smiled. The left tackle has spent most of the last two years out of the spotlight and in the headlines, his largely private recovery from two season-ending ankle injuries as closely watched as any Ravens storyline.

Speaking to local media for the first time in more than a year, Stanley said Thursday that he was feeling “very good.” He participated fully in practice on Wednesday and Thursday for the first time since returning to practice in early September. His long-awaited season debut — and just his second game since November 2020 — could come Sunday against the Buffalo Bills.

“It’s possible it’s a week,” Stanley said. “I am very close and we will discuss it with the rest of the staff, the coaches and many others. And we’ll make the best decision that’s best for the team.”

The question of when Stanley might return, and what the 2019 All-Pro might look like if he does, hung over the beginning of this Ravens season, just as it did at the beginning of last season. Stanley watched from the sidelines in training camp and the preseason this summer. He was limited to two of three practices in each of the Ravens’ first three weeks of the regular season. He was ruled out of the Ravens’ first two road games and did not play in the home opener in week two.

As the number of injuries at the position increased, Stanley’s recovery and schedule became even more scrutinized. Ja’Wuan James suffered a season-ending Achilles tendon tear in Week 1. Patrick McCurry left the Ravens’ win over the New England Patriots on Sunday with a sprained ankle and has not practiced this week. Rookie Daniel Faalele, who finished the game protecting quarterback Lamar Jackson despite never playing the position in college, is technically their fourth string.

“We want to make sure I can play and stay here the whole season,” Stanley said. “I think things are going very well, everything is going according to plan. I want to be there. I want to be there as soon as I can. The whole organization has bought into that approach and we’re all on the same page about it, making sure I’m ready to go when I come out. I’m really looking forward to going out with my teammates and I’m very close.”

Last week, coach John Harbaugh said Stanley’s return was imminent, calling him “week-by-week, day-to-day” and saying he was in “probably the best shape I’ve seen since he’s been here. Harbaugh reiterated Wednesday that the Ravens won’t call Stanley up for a game if he doesn’t feel ready.

“We don’t want him to go there if he doesn’t feel it’s going to be good if he does [not] I’ll be ready to go,” Harbaugh said. “It’s a priority to get out there and be at our best when he comes back. At the same time, he will have to jump in at some point, so it could be this week. We’ll just have to see. He practiced quite a lot [Wednesday]and we’ll see where he is now and then [Thursday]then on Friday and make a decision.”

Stanley said the Ravens are managing his rehab “the right way.” According to Pro Football Focus, he said he feels “much better” than he did before the Ravens’ 2021 season opener against the Las Vegas Raiders, when he allowed nine quarterback pressures with just 40 pass blocks.

Stanley never returned to practice last year, and the team announced in October that he would undergo season-ending ankle surgery for the second year in a row, believed to be his third. Stanley said Thursday that he also underwent a separate “major” lower-body surgery. He declined to provide further details.

“I think that’s why the whole organization has taken this approach to make sure I can be out there and not play a game and sit out the rest of the season,” he said. “What happened last year was very indicative of what we’re doing this year and the approach we’re taking has taken me back. As I said, I’m very close.’

Stanley said he’s “confident I’ll be the Ronnie Stanley I know I can be,” and quickly added, “I still don’t feel like I’ve reached my full potential.” In 2019, his fourth season in Baltimore, he earned Pro Bowl and All-Pro honors for the first time. According to PFF, Stanley had no sacks and gave up just six quarterback pressures in 16 games that season, helping lead a pass rush that finished the season as one of the NFL’s most efficient.

On October 30, 2020, Stanley signed a five-year, $98.8 million contract, making him one of the NFL’s highest-paid offensive linemen. Two days later, he was carted off the field with a season-ending ankle injury after Pittsburgh Steelers outside linebacker TJ Watt inadvertently rolled into the back of Stanley’s left leg. At the time, Stanley led all NFL games in pass-block wins and was fifth in run-block wins, according to ESPN.

Stanley said Thursday he was “very optimistic” about “getting back to where I want to be.” Practice repetitions will tell him when he is ready, when he feels flexible enough. If it’s Sunday, Stanley can have his hands full. The Bills rank fifth in the NFL in sacks per ESPN and have perhaps the best group of rushers in the league, led by Von Miller (two sacks) and Greg Russo (3 1/2 sacks).

With a successful return — whether it’s this weekend, next weekend or at some point later this season — Stanley would put to rest speculation about where his career will go. After two tough years in Baltimore, he said he’s “in a really good place.”

“I really think he’s made big strides,” offensive coordinator Greg Roman said Thursday. “He looks explosive. Like, everyone jokes with him that he has fresh legs. But he looks explosive, as good as I’ve seen him. You know, he hasn’t played ball in about two years, so he’s definitely going to have an acclimatization period that we’re going through right now. Love is where it is. I was very encouraged by the way he looked. I would say that the arrow is up, to the end.”