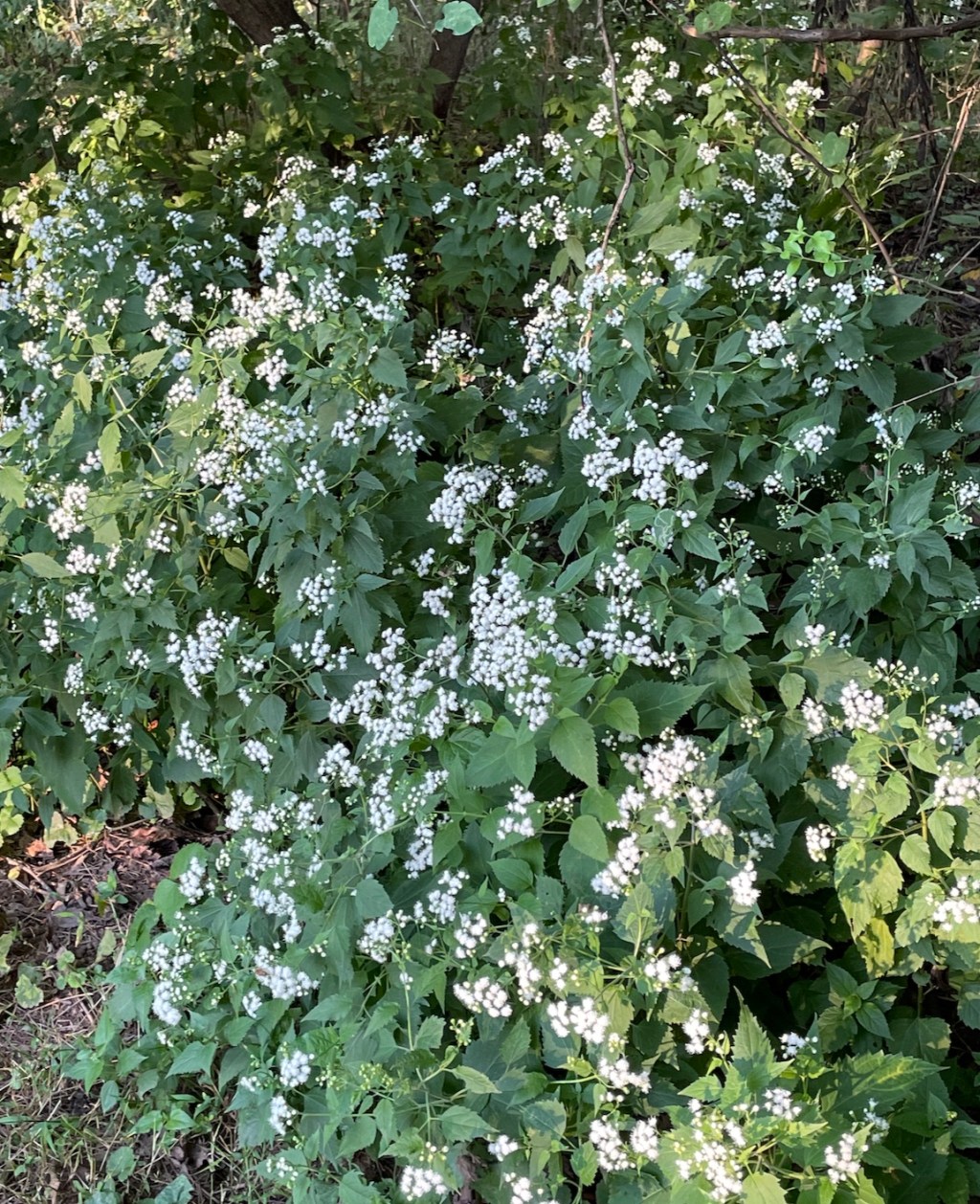 All spring and summer I watched the weed grow at the edge of the naturalized old hedge on the east side of our yard. Week after week I kept promising myself that I would tighten them up. “Maybe next week” became my mantra. Still, the plants provided some much-needed greenery—the deer (four new fawns!) ate almost everything else—and it didn’t seem to matter if I just left them alone.

So many weeks have come and gone and the plants are still there. Except they suddenly stopped looking like weeds. At a time when many flowering plants are dying, these have only recently bloomed. Clusters of small white flowers appeared on the scene just in time for the migrating butterflies to need food. Bees also find flowers attractive.

What kind of plant is this? This is white snake root (Ageratina altissima). And I don’t know why I keep wondering about it. The first plants appeared in my yard five years ago, and I still forget about them until this time of year.

The tiny flowers are arranged in flat-topped panicles and create a bright burst of contrasting color against the dark green foliage. White snakewort is one of the last native plants to flower and the flowering period can last up to two months if the plants are well established in the colony.

White snakeroot is also poisonous, but let’s leave that fact aside for a moment. Because when you consider the qualities gardeners often look for in a plant, white snakeroot ticks a lot of boxes:

The fact that the plant is poisonous should only be considered if you are raising livestock (or if you think a small child might decide to eat the foliage). While deer will not touch it, cattle and other grazing animals apparently will and are at risk of poisoning.

It is not only animals that are at risk of death; Tremetol, a plant toxin, passes into cow’s milk. Especially in the 1800s, when migrants passed through and settled in the American Midwest region, thousands of people died from what became known as “milk sickness.” (Abraham Lincoln’s mother, Nancy Hanks Lincoln, who died when Abraham was nine in 1818, was perhaps the most famous person to die from the disease.)

The fascinating story of how this plant was finally recognized as the cause of milk disease and eventually eradicated from pastures. You can read about it at: https://www.dukefarms.org/making-an-impact/distance-learning/bee-friendly-flowers-week-11-snakeroot/

There’s also plenty of additional information about white snakeroot that might just convince you to add it to your property.

*White snakeroot self-seeds quite easily, so it can come up where you don’t want it to.