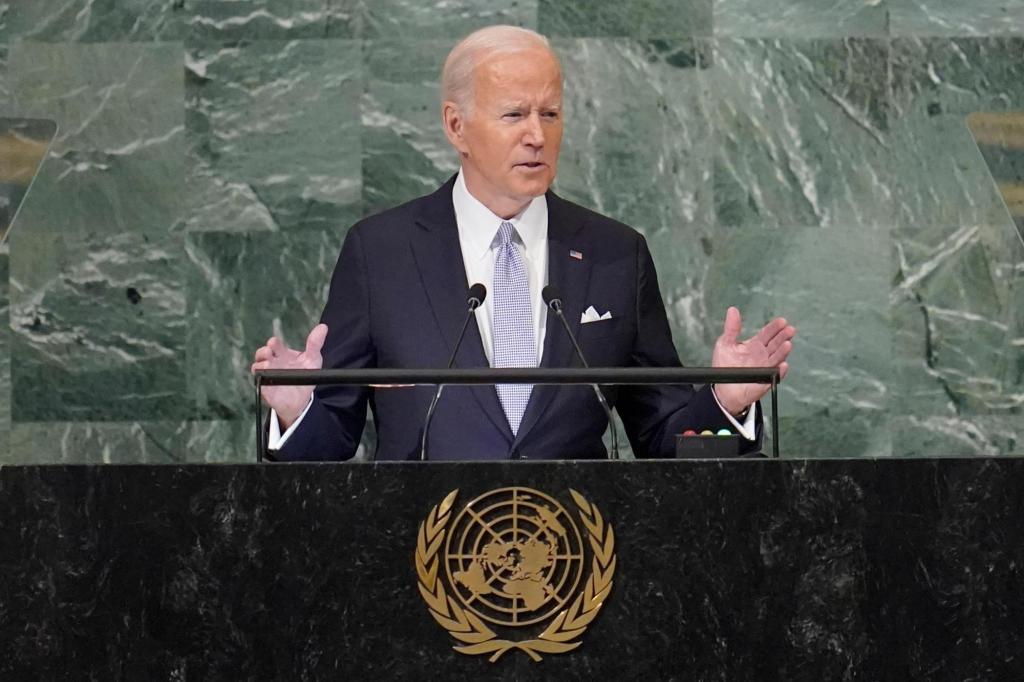 UNITED NATIONS (AP) — President Joe Biden said at the United Nations on Wednesday that Russia has “shamelessly violated the basic principles” of the international organization with its war in Ukraine, as he called on countries around the world to firmly support the Ukrainian resistance.

In a scathing condemnation of Russia’s seven-month invasion, Biden said reports of Russia’s abuses against civilians and its efforts to erase Ukraine and its culture “should make your blood run cold.” He was referring to President Vladimir Putin’s announcement on Wednesday that he had ordered the partial mobilization of reservists, a highly unpopular move that has sparked protests in Russia.

And Putin’s new nuclear threats against Europe demonstrated Russia’s “reckless neglect” of the obligations of a country that signed the Treaty on the Non-Proliferation of Nuclear Weapons, Biden said.

He also criticized Russia for holding “sham referendums” this week in territory it forcibly seized from Ukraine.

“A permanent member of the UN Security Council invaded his neighbor, tried to erase a sovereign state from the map. Russia has shamelessly violated the basic principles of the UN Charter,” he told his audience at the UN.

Biden’s speech was part of an effort to keep Russia isolated on the world stage as the cost of war rises, energy concerns mount this winter and Congress is likely to be more skeptical of more military defense spending. The president called on all countries, democratic or autocratic, to oppose Russia’s “cruel, unnecessary war” and support Ukraine’s efforts to defend itself.

“We will stand in solidarity against Russia’s aggression, period,” Biden said.

Biden also highlighted the implications of the invasion for the world’s food supply, pledging $2.9 billion in global food aid to address shortages caused by the war and the effects of climate change. He praised UN-brokered efforts to create a corridor for maritime exports of Ukrainian grain and called for the agreement to continue despite the ongoing conflict.

During his stay at the UN General Assembly, Biden met with Secretary-General António Guterres and held his first meeting with new British Prime Minister Liz Truss, during which they discussed the Russian war, energy security and China. On the same day, he was supposed to meet with French President Emmanuel Macron.

He is also expected to push for countries to meet the $18 billion goal to replenish the Global Fund to Fight AIDS, Tuberculosis and Malaria, reaffirming the U.S. commitment to the $6 billion goal.

But the heart of the president’s visit to the UN this year was his scathing condemnation of Russia as its war approaches the seven-month mark. One of the deputy ambassadors of Russia to the UN, Gennady Kuzmin, sat on the Russian chair during Biden’s speech.

The appeal came as Russian-controlled regions of eastern and southern Ukraine announced plans to hold Kremlin-backed referendums on joining Russia and as Moscow loses ground as a result of the invasion.

Biden faced no shortage of tough questions when the leaders gathered this year.

“While the United States is open to a mutual return to the Joint Comprehensive Plan of Action if Iran meets its obligations, the United States has been clear: we will not allow Iran to acquire nuclear weapons,” Biden said.

US national security adviser Jake Sullivan said administration officials would consult with other signatories to the 2015 accord on the sidelines of meetings this week.

This year’s UN assembly returned to a full-scale in-person event after a two-year shutdown due to the pandemic. In 2020, the face-to-face meeting was canceled and leaders gave pre-recorded speeches instead; last year was a mix of in-person and pre-recorded performances. Biden and First Lady Jill Biden hosted a leaders’ reception Wednesday night.

Chinese President Xi Jinping chose not to attend this year’s UN meeting, but his country’s behavior and intentions loomed large.

Weeks after tensions flared across the Taiwan Strait when China objected to a visit to Taiwan by House Speaker Nancy Pelosi, Biden called for “peace and stability” and said the US would “resist unilateral changes to the status quo on both sides.” “. It came days after Biden reiterated that the US would provide military aid to Taiwan if China tried to invade.

China’s government said Monday that Biden’s statement in an interview with CBS’ “60 Minutes” that U.S. forces would defend the self-governing island was a violation of U.S. commitments on the issue, but he gave no indication of possible retaliation.

Biden also said on Wednesday that “fundamental freedoms are under threat in every part of our world,” referring to a report by the UN Human Rights Office last month that raised concerns about possible “crimes against humanity” in China’s western region against Uyghurs and others. predominantly Muslim ethnic groups.

He also singled out for criticism the military junta in Myanmar, the Taliban, who control Afghanistan, and Iran, where he said the US was supporting protests in Iran that erupted in recent days after a 22-year-old woman died while under worthy of morality. police for violating the country’s Islamic dress code.

“Today we stand with the brave citizens and brave women of Iran who are demonstrating right now to secure their basic rights,” Biden said.

He urged other countries to fulfill their own environmental obligations. “And not too soon – we don’t have much time.”