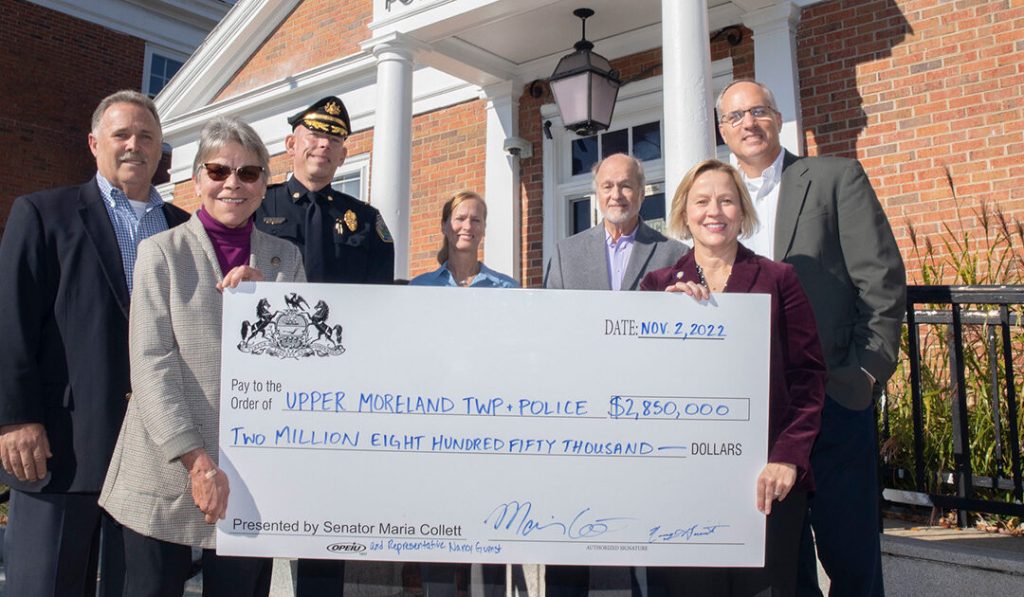 “Everyone deserves to feel safe in their community,” Collette said at the check presentation ceremony. “This is a transformational investment for the people who live in Upper Moreland and those who serve them. To their credit, the men and women who work here are content with what they have, never sacrificing the quality of their service. But it’s time to express our gratitude not only with words.”

“The funding announced today will go a long way in providing resources for much-needed renovations to the Upper Moreland Police Station and township building,” Guenst said. “In addition, this project will allow for necessary safety measures and precautions that were lacking in the previous building.”

Clinton “Kip” McFatridge, president of the township board of commissioners, expressed his appreciation and added, “It started about seven years ago, this project, and we’re finally there…. It means so much when we can [work together and] get money from the state in various ways to get these projects done… It’s time to get it [renovation] done [and] put a police station behind this building [police officers’] security—they also need security so they can protect us.”

After the announcement, Upper Moreland Police Chief Andrew Block and Township Manager Matthew Candland toured Collett and Gunst around the common facility, built in 1967, highlighting some of the major issues this funding will help address, such as overcrowded and inadequate police housing, storage evidence and lockers, and lack of lobby security and ADA accessibility. They also shared how the funded project will help them build a new, modern police station in the area.

This award was funded through the Pennsylvania Reconstruction Capital Assistance Program (RACP). The program is administered by the Budget Office for the acquisition and construction of regional economic, cultural, community, recreational, and historic improvement projects.