Todaypennsylvania.com
Home Pennsylvania The decline in gas prices in Berks and beyond may have stalled,... 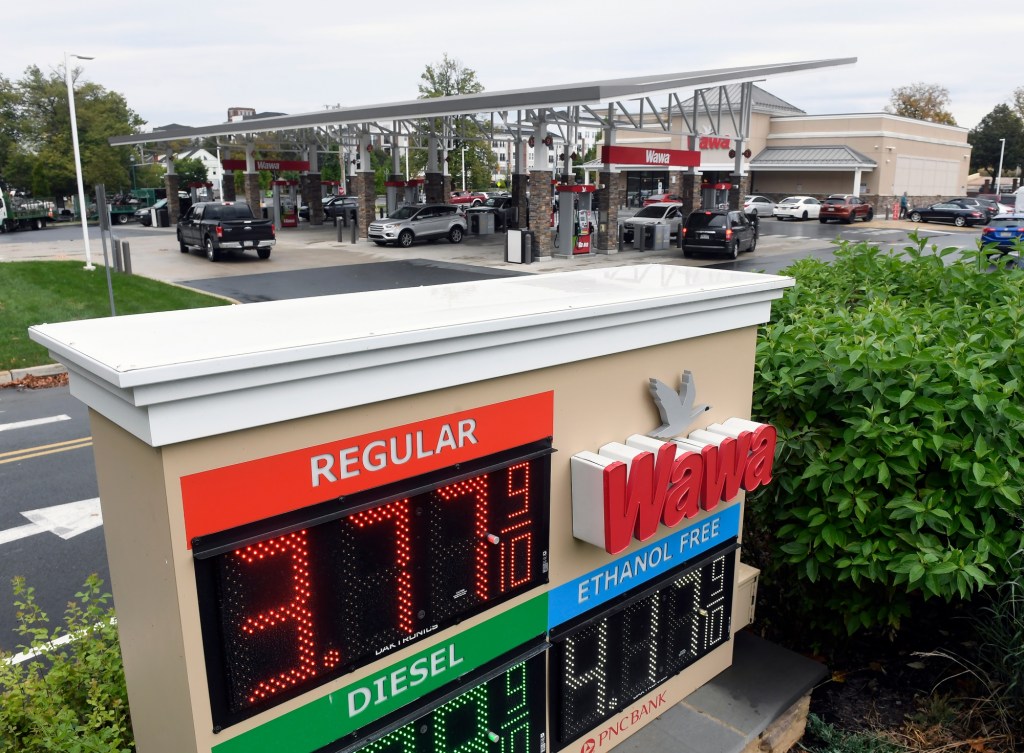 A nearly 100-day period of falling gas prices in southeastern Pennsylvania and across the country appears to be coming to an end, industry analysts said.

The 14-week downward trend that began in June was the longest streak since 2015 and followed a record surge that pushed the average price per gallon across the country to more than $5.

The national average rose just a penny a gallon on Wednesday, but that could be a sign that the downward trend in prices is slowing, analysts said.

According to AAA, the average price of regular gasoline in Berks County on Friday was $3.81 a gallon, about 1 cent below the statewide average of $3.80 and 12 cents below the national average of $3.69 dollar.

That’s a $1.20 drop from early June, when local drivers paid an average of $5.01 a gallon as increased travel boosted demand for gasoline and Russia’s invasion of Ukraine pushed up oil prices.

The current price is still nearly 50 cents a gallon higher than the Berks average of $3.34 a year ago.

And the weekly change in prices was just 4 cents nationwide, the smallest since prices began to plummet, according to AAA, and could signal a quick end to the streak.

“All streaks must end at some point, and the national average price for a gallon of gasoline has fallen $1.34 since its peak in mid-June,” AAA spokesman Andrew Gross said in a statement. “But there are major factors affecting global oil prices – war, COVID, economic recession and hurricane season. All of this uncertainty could push oil prices higher, which would likely lead to slightly higher pump prices.”

Friday’s lowest price in Berks was $3.66 a gallon in Temple.

“While gas prices continue to rise in some states, most continue to decline. However, this week could reverse the downward trend,” said Patrick De Haan, head of oil analysis at price comparison site GasBuddy.

“Given some of the challenges we’re having in the Plains and Great Lakes with the start of the winter gasoline transition, I think we have the best potential to see an end to the weekly downward trend in prices,” he said. “West Coast states also continue to rise as unexpected refinery issues continue to crop up, hampering downward movement. While gasoline may move higher, diesel prices should continue to decline after last week’s much-needed jump in inventories.”

The shift to winter gasoline, beginning in the Midwest, could also have an impact, as well as problems with refineries on the West Coast, he said.

The good news, he added, is that diesel prices should continue to decline as inventories build.

According to the federal Energy Information Administration, demand also continued to decline, but this was countered by fluctuations in oil prices.

The EIA predicts that prices will fall a little more to a national average of $3.60 a gallon by December, then rise again to $3.70 by May, when the summer driving season and the summer gasoline transition begin.

“One of the key points of our short-term energy forecast is that we are projecting record average annual crude oil production in 2023,” EIA spokesman Chris Higginbotham said. “Our forecast is that the United States will produce 12.6 million barrels per day of crude oil in 2023, surpassing the previous record of 12.3 million barrels per day in 2019.”

At the end of trading on Wednesday, the price of crude oil was 83.62 dollars per barrel, continuing the slight increase in prices from the weekend, according to the Associated Press.

The question now is whether Wednesday’s price increase in the national average is just a blip or a precursor to a return to higher prices, the AP reports. The answer matters to motorists and to President Joe Biden, who has taken credit for lowering prices by freeing millions of barrels of oil from the nation’s stockpiles.

Gasoline prices largely reflect trends in global oil prices, with crude oil prices falling since mid-June amid growing fears of a global recession that will reduce demand for energy, the AP reported.

Shifts in economic sentiment, Russia’s war against Ukraine and even hurricane season — always a threat to disrupt oil refineries along the Gulf Coast — make forecasts uncertain.

“I suspect we’re going to see volatile gasoline prices for the rest of the year, with some down days and some up days,” Tom Close of the Oil Price Information Service told the AP.

He predicted that the next series will be a series of price increases early next year, driven by investors, speculators and fears that there will not be enough fuel.

Phil Flynn, an analyst at Price Futures Group, told the AP that prices will rise once the withdrawal from the U.S. strategic oil reserve, a million barrels a day for six months, ends in the fall.

“The market is going to start pricing that out, and refiners aren’t going to get that cheap oil out of storage,” Flynn said. “We are likely to see a significant spike in oil prices in the winter.”

Some businesses, such as airlines, have been able to pass on higher fuel prices to their customers. Others could not do it.

“We haul for the farmers, and we can’t raise (prices) for the farmers because they’re struggling too,” said Mike Mitchell, part owner of Mitchell Milk Hauling, which hauls about 10 million pounds of milk a year from farms in the Northwest. Pennsylvania, said in an interview with the AP.

The company’s seven trucks burn about $20,000 a month in gas, and the drop in gas prices this summer has provided only limited relief, he said.

“Everything else you buy is going up,” Mitchell said. “Every part of the truck has doubled in size.”

Trump remains ‘king’ for some in Pennsylvania, but whether that helps the GOP is unclear – NBC10 Philadelphia