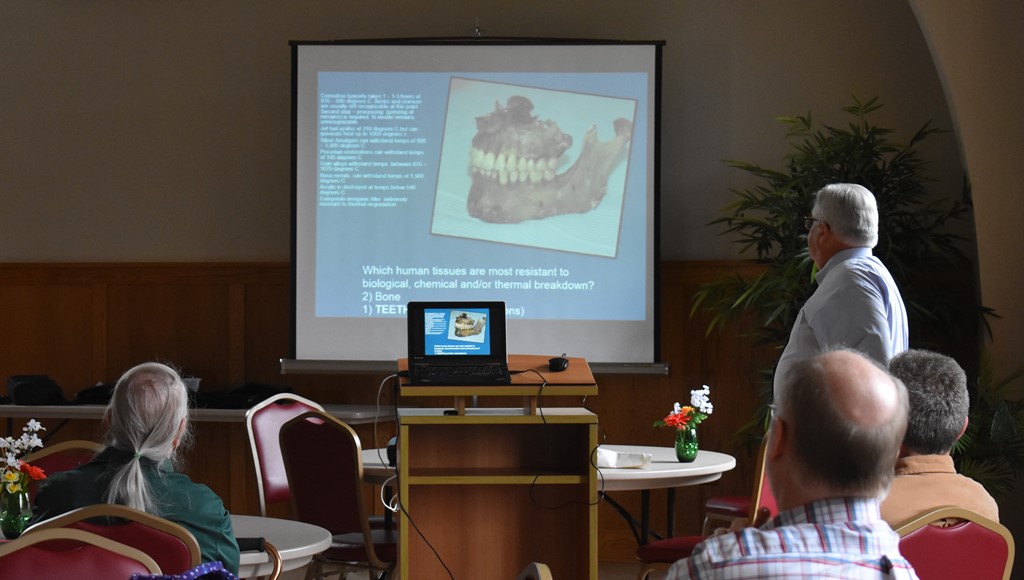 
Ladies of the Ancient Order of Hibernia from St. Kalamkil Parish in Boertown sponsored a presentation by Dr. Matthew Patterson on the Irish massacre at Daphis-Kat.

Duffy’s Cut is the story of the murder of 57 Irish Catholic immigrants – 55 men and two women – who remained hidden for about 180 years. The Irish arrived in Philadelphia on June 23, 1832, and six weeks later they all perished.

Launched in 2004, Duffy’s Cut is an archeological excavation and archeological search for the lives and deaths of forgotten people from Duffy, who sought to give an idea of ​​the early 19th century attitudes toward industry, immigration and disease in Pennsylvania.

On March 20, 2009, the first human bones were found, consisting of two skulls, six teeth and 80 other bones, according to https://duffyscutproject.com.

Patterson, a forensic dentist, has been working on the project since 2009.

During a March 20 presentation at The Ladies Ancient Orden of Hibernians in Boertown, an Irish Catholic organization for women, Patterson outlined the events that led to the massacre and the efforts to identify the victims.

In 1832, the Philadelphia and Columbia Railways built tracks.

Their goal was to eventually build a railroad from Philadelphia to Columbia, Pennsylvania, and eventually to Pittsburgh. This was the beginning of the main line. However, the Mile 59 near Malvern was difficult to build. The valley had to be filled up, tearing down the surrounding hills.

All this had to be done by hand with horses, pickaxes, carts, pitchforks and shovels.

Patterson explained that the global cholera epidemic affected the area in the hot, humid summer of 1832.

At the time, the Irish were coming to America in search of a better life and were willing to work hard to support their families who remained in Ireland.

The Irish who were hired for Duffy’s Cut were from Tyrone, Derry and Donegal in Ireland, with the largest number from Donegal. They spoke only Gaelic. They were paid 25 cents a day and a serving of whiskey.

They worked 16 hours a day. It was believed that Donegal was also the birthplace of Philip Duffy, a railway employee responsible for the project and in whose honor the incident was named.

Philip Duffy hired the Irish directly from the ship on which they arrived, John Stamp.

Although no one on board the ship contracted cholera, the workers were accused of bringing it to Pennsylvania. Cholera came to Pennsylvania from Canada, traveling along the Hudson River to New York and then to Pennsylvania. Although some died of cholera, most were brutally killed by thugs who hated Irish Catholics.

When the workers began to suffer from cholera, which they got while drinking from infected streams, they turned for help to the local community, knocking on the door.

There were no local police at the time, so neighbors called the local police, the East Whiteland Horse Company. Extreme hatred of the Irish led locals to blame the Irish for the cholera outbreak and called on the militia to get rid of them.

While newspapers said workers died of cholera, an anthropological examination of the remains shows many victims died from blunt force injuries from bullets and axes, Patterson said.

One of the first problems suffered by the excavation team was that they could not find bodies, only personal belongings and artifacts.

The project began after the grandchildren of the Secretary of the Pennsylvania Railroad President, who acquired the Philadelphia and Columbia Railways, reviewed the documents of his late grandfather.

The Duffy’s Cut file began with Martin Clement, president of the Pennsylvania Railroad from 1935 to 1949. His secretary, Joseph Trypician, learned of the Duffy’s Cut file and received the file after Clement’s death in 1966. When Trypician died in 1977, his wife passed the file on to her grandchildren William and Frank Watson.

In September 2000, William Watson, a professor of history at Imchakulat University, and his friend looked out the window of his office and saw bluish electric lamps in the shape of a man flashing on ATVs, and suddenly the light went out.

Assuming they saw ghosts, Patterson noted that it was then that they knew where to start looking for bodies. Excavations began in March 2004.

Patterson joined the project in March 2009. One of Patterson’s discoveries was a dental anomaly. Thanks to DNA samples from Irish people and the use of the ship’s manifesto, he was able to identify seven members of Rudy’s family.

The first identified body was 18-year-old John Raddy. His remains were taken home to Donegal and buried in 2013.

The second body identified was 30-year-old widow Catherine Burns. Anthropologists have realized that the skeleton belonged to a woman because of a larger pelvis. Her remains were returned for burial in Tirana, Ireland.

The Pennsylvania Railroad recognized the massacre as signs.

The project failed. First, they could not find the bodies. It was discovered that the first seven bodies were buried in coffins.

The rest of the bodies thrown under the railway embankment have joint remains. There was also a struggle for access to the site, as three-quarters of the section is now surrounded by residential buildings. And at some point Amtrak was not allowed to dig. The project relies on private funding, which has slowed the process.

Patterson noted that it was named the most important Irish anthropological project in the country. He called Duffy’s Cut the most worthy project of his 37-year career.

For more information on the Duffy’s Cut project, visit www.duffyscut.immaculata.edu.

Presented by Martha Goeringer of Boertown