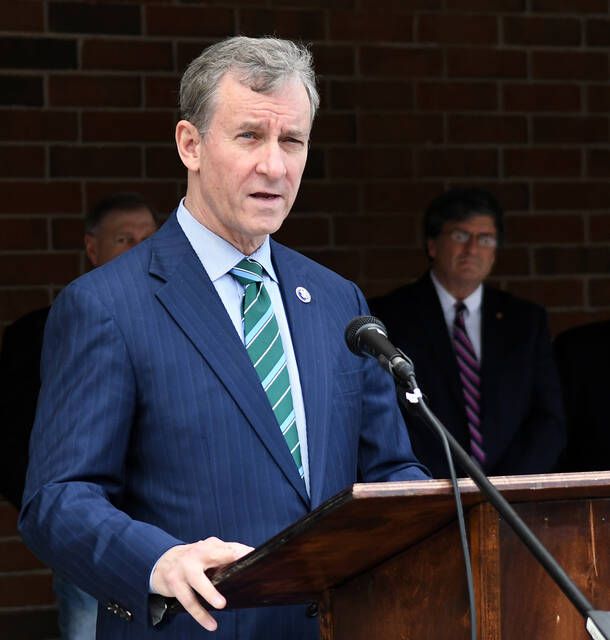 WILKES-BARRE – Pennsylvania’s U.S. Senate campaign is really heating up as we head into the final week before the Nov. 8 general election.

Democrat John Fetterman, the state’s lieutenant governor, is in a tight battle with Republican Dr. Mehmet Oz for the seat held by U.S. Sen. Pat Toomey, R-Lehigh Valley, who decided not to seek a third 6-year term. term.

Fetterman and Oz faced off in the race’s only televised debate last week.

And with the crucial vote coming up on November 8, both candidates have put forward some heavy hitters to try to convince voters to vote for them.

On Saturday, Nov. 5, President Joe Biden and former President Barack Obama will travel to Philadelphia to campaign for John Fetterman, Josh Shapiro and Pennsylvania Democrats on the ballot ahead of the midterm elections.

And the Lincoln Project, the leading “pro-democracy organization” in the United States, says it is dedicated to preserving, protecting, and protecting democracy.

The Lincoln Project released a new ad called “Hell No” — encouraging African-American college students to get out and vote. The ad, voiced by comedian and actor Leslie Jones, tells how Republicans are trying to intimidate voters and keep them from voting. The ad urges voters to face their fear and go to the polls.

“Republicans know that if they want to win this year, they need to use fear to keep Democrats from voting,” said Reed Gallen, co-founder of the Lincoln Project. “If they win, the Republicans have promised to abolish individual rights and promote racist policies. Everyone needs to stand up to threats and intimidation and go vote to prevent them from taking power.”

The Lincoln Project released the following statement in response to the attack on Speaker Nancy Pelosi’s family and the escalation of violent rhetoric surrounding the election:

“From January 6th, to the violence attributed to the FBI raid at Mar-A-Lago, to yesterday morning’s attack on Speaker Pelosi’s family, MAGA extremists have increasingly sought to use violence as a political tool. The specter of violence is actively encouraged by MAGA candidates and GOP leaders who use the language of violence as a means to gain support from the extremist base.

“This is a reckless trend that is leading to a dangerous moment for American democracy. We call on Dag Mastryan and Mehmet Oz to state clearly and unreservedly that they condemn violence of any kind and that their supporters should not commit violent acts on their behalf.

“It is time for every American to speak out against political violence and respect the rule of law. It starts with those people who want to rule the nation.

To learn more about the Lincoln Project, go to lincolnproject.us.

“In Pennsylvania, you have some important choices to make this year,” reads former President Obama’s ad. “So if the fate of our democracy and a woman’s right to choose is in jeopardy, vote Democrat on November 8.”

Fetterman could make it to the Senate

Halloween is the spookiest time of the year, but the Dr. Oz campaign says it’s even scarier this year with “radical” John Fetterman promoting scary policies like pardoning convicted murderers and decriminalizing heroin, fentanyl and methamphetamine.

“It’s absolutely terrifying to think about what John Fetterman might do in the Senate. John Fetterman pushed for clemency for convicted murderers, an end to cash bail for violent criminals, the release of one-third of all inmates, defunding of the police, and the decriminalization of heroin, fentanyl, and meth,” said Brittany Yanik, Dr. Oz’s Senate Communications Director. “John Fetterman’s radical politics are neither trickery nor pleasure.” They are simply deadly, dangerous and wrong for Pennsylvania.”

Here’s what the Oz company calls some of Fetterman’s “scariest” policies:

• John Fetterman has repeatedly said he agrees with the mass release of one-third of Pennsylvania’s inmates.

• John Fetterman supports the abolition of life sentences for murderers.

• In 2018, John Fetterman called for the abolition of cash bail, calling it “common sense”.

• Fetterman has a terrible track record of being soft on crime. FBI data shows that violent crime rose in Braddock, Pennsylvania, while Fetterman was mayor. Violent crime peaked in 2017 during Fetterman’s tenure, as reports to local police quadrupled since 2006.

• Fetterman called the socialist single-payer system “perfect,” boasted that he “pushed for single-payer health care long before it was mainstream,” and said he supports socialist Bernie Sanders’ Medicare For All bill.

• Fetterman was exposed for previously signing a pledge to ban fracking, calling it a “stain” on Pennsylvania and saying “I don’t support fracking at all — and never have.”

• Fetterman “had a history of delinquent taxes” and failed to “pay tens of thousands of dollars in taxes to the local school district on time.” In 2016, he made the excuse that his taxes “failed.”

the decline of the US economy

Sean Michael Schutt, a spokesman for the Pennsylvania Republican Committee, said the state’s economy continues to decline and Fetterman can’t fix it.

The joker was referring to a recent article by Dr. Oz.

“Despite promising to fight for American families when they entered the majority nearly two years ago, Democrats in Congress have instead delivered a crippled economy, draconian regulations and heavy-handed, untouchable big government policies,” began Dr. Oz.

Shute said Oz continued to discuss his personal outreach to voters at various stops throughout the Keystone State.

“Families in Pennsylvania are stuck choosing whether to fill up on gas or buy groceries — and Democrats in Washington have no plans to provide real relief. In fact, they have no agenda for prosperity,” Oz said.

Shute said Dr. Oz went on to talk about Fetterman and his “failed leadership in Pennsylvania” and the “terrible policies Fetterman would impose on the people of Pennsylvania” if he were sent to the Senate.

Pennsylvania Lt. Gov. John Fetterman said this week that Republican gubernatorial candidate Doug Mastriano has run an increasingly hateful and anti-Semitic campaign in recent weeks, and that Dr. Oz has endorsed and supported the political support of his fellow extremist Republican.

Fetterman’s camp said Oz is slated to wrap up the general election this Saturday, Nov. 5, by campaigning alongside Mastriano on stage at a Trump rally.

“The anti-Semitism we hear from Doug Mastriano and his surrogates is vile and dangerous. I condemn and condemn in the strongest possible terms this hatred that corrupts our politics and incites violence. It makes us all less safe.

“Dr. Oz’s continued support of Doug Mastrian and his hatred is disturbing. In fact, all Oz has said about Mastriano is that he supports him. Oz and Mastriano have a radical agenda that bans abortion without exception and continues to spread false conspiracy theories about the 2020 election, but Oz’s continued support of Mastriano’s increasingly hateful and anti-Semitic campaign is disqualifying.”

by the social security group

U.S. Representative Matt Cartwright received a personal endorsement this week from the National Committee for the Preservation of Social Security and Medicare (NCPSSM).

The benefit advocacy organization recognized Cartwright for his dedication to preserving and expanding health care for seniors.

“In this election, the choice couldn’t be clearer between someone who fights for seniors, who works to do more than just save these programs and improve the lives of seniors, and someone who sees Social Security and Medicare as a burden on our communities.” — Adcock said.

The Congressman and Mr. Adcock were also joined by local seniors who have benefited from these programs.