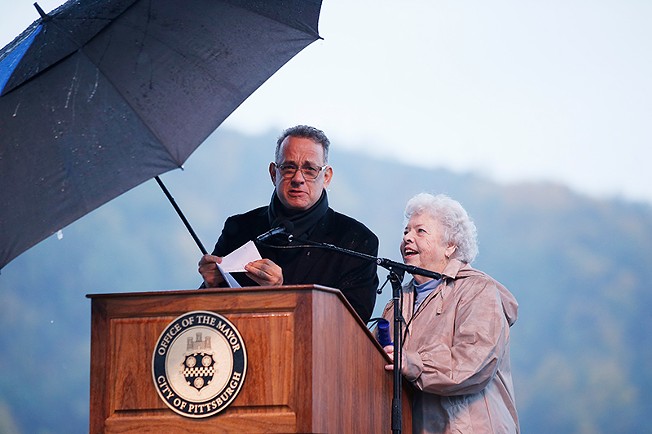 Tom Hanks, left, stands next to Joan Rogers at the Stronger Than Hate: A Gathering of Compassion, Unity and Love rally in downtown Pittsburgh on November 9, 2018.

Have you ever wondered what kind of music Tom Hanks likes? If the Academy Award-winning actor were ever to, say, curate an entire day of tunes, how would it go? No more wondering on Thanksgiving when Hanks takes over 91.3 WYEP for a day of songs selected exclusively for listeners of the station.

Dubbed “Hanks-Giving,” it will be broadcast on Thursday, November 24 from 8am to 7pm on the independent, non-commercial adult alternative music station. Additionally, from 7-8 and 7-8 p.m., there will be music curated by WYEP hosts from Hanks’ movie soundtracks.

A press release says Hanks has become a “proud Pittsburgher” after playing local TV personality Fred Rogers in the 2019 film. A beautiful day in the neighborhoodwhich was filmed and set mainly in the city.

Hanks recently returned to the movies A man named Ottothe American wide-screen adaptation of Swedish author Fredrik Backman’s best-selling novel (the novel was first adapted into a Swedish-language film in 2015 A man named Uwe). A man named Ottodescribed in Sony Pictures’ synopsis as a film about a “grumpy widower” who forms unlikely friendships with his new neighbors, is slated for a select Christmas Day release and a wider release on January 13, 2023.

In November 2018, so did Hanks attended the rally in support of the 11 people killed during the mass destruction shooting at the Tree of Life synagogue. in Squirrel Hill.

For the Thanksgiving feast of ears, WYEP says Hanks presented “an eclectic and very fun list of 100 songs to take over the station, spanning 66 years — from the 1956 musical to the duet released a few months ago. between Elvis Costello and Hanks’ wife Rita Wilson.” WYEP also highlights that Hanks “an appreciation of early and mid-1960s rock and roll,” adding that his 1996 directorial debut What you do!which followed the young band’s rise to fame in 1964, was “a magnificent ode to this music and these musicians”.