Todaypennsylvania.com
Home Pennsylvania Water supply has been restored in the schools of the Hanover district;... 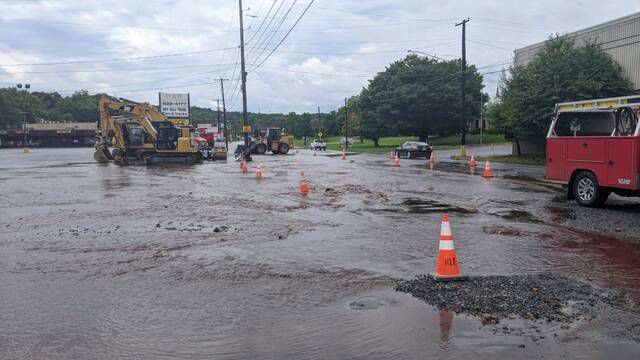 HANOVER TWP. — Water service has been restored to both Lee Park and Memorial Elementary after an earlier main break, Hanover Township officials said Thursday night, and the buildings will be open Friday as scheduled.

Work on the break itself was supposed to be completed at night, utility workers reported.

A 24-inch main broke along the Sans Souci Barquay, causing two schools to dismiss early and water pressure to be reduced or absent to many homes and businesses in the area.

The northbound lane of the boulevard was closed due to flooding.

“We anticipate that repairs will be completed overnight,” Turcmanovich said in an email later Thursday.

An notice The utility’s website says it will take about 12 hours to repair the breakdown, which happened around noon.

Water from the breach flowed into low-lying sections of the parkway, which flooded, closing the northbound lanes from St. Mary’s Road to the intersection. Traffic was diverted onto St Mary’s Road or Fellows Avenue, which eventually blocked Linwood Avenue where motorists attempted to exit onto West End Road.

Several businesses along the boulevard remained open while others closed.

The break happened near the Dollar General and Don’s Deli, where crews are replacing pipes that date back to 1900.

“The existing pipe in the area is cast iron and has a history of breaks and leaks,” Jeremy Nelson, senior engineer for Pennsylvania American Water, said when the project was announced Aug. 17.

Crews were seen Thursday near the former Air Products building using tools to shut off the water main.

The project involves installing new 24-inch and 12-inch pipes from the intersection of Oxford Street to Main Road. Construction is expected to continue through the spring of 2023, with final restoration scheduled for the summer of 2023.