Todaypennsylvania.com
Home Pennsylvania “We wanted to do something special” 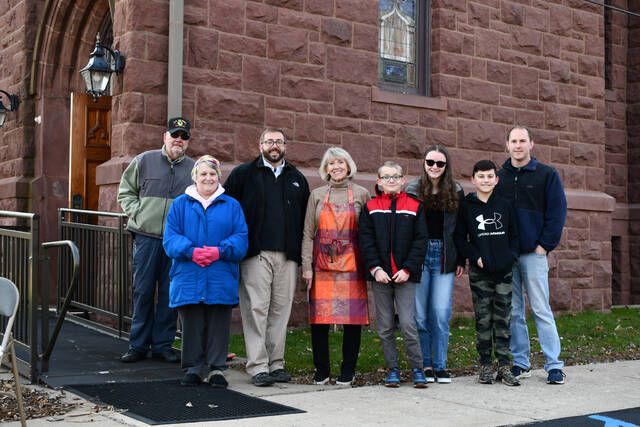 FORTY FORT — In keeping with the spirit of the season, members of The United Methodist Church, 26 Yeager Ave., took time out from their vacation so community members could enjoy a home-cooked Thanksgiving dinner.

Pastor Richard Bradshaw is no stranger to donating, having spent 21 years at the Ronald McDonald House before coming to Forte Fort about 16 months ago. And although his tenure has only just begun, he and his parish are working to make a difference.

“So today we wanted to reach out to the community at a really difficult time,” he said. “This year, it’s hard for people to put food on the table. So our church got together and decided we wanted to do something special.”

That something special, Bradshaw explained, involved cooking turkey, stuffing, potatoes, cranberry sauce and “a million pies” that were distributed absolutely free to anyone in need. “To just give them a leg up, just to bless them and show them some love at this time of year when so many people are out of work,” Bradshaw said.

Bradshaw also noted that many of the people who come may not even need food. They were just looking for a handshake, “Happy Thanksgiving” and lots of hugs.

“It was beautiful,” he said.

And with an army of philanthropists in the basement making the food, delivery drivers including several Vietnam-era veterans, and a steady stream of kids delivering food from the basement to the cars waiting in the parking lot, it was truly a team effort for the greater good.

And not a single soul takes credit for itself, instead preferring to thank everyone around.

Pastor Bradshaw thanked the children for their hard work, the veterans and everyone else who was there, including Marbeth Rudolph, who he claimed was the mastermind behind the whole thing.

Rudolph paid for it though, saying: “We’ve had a lot of help and we’re pretty well organised. People want to help out on Thanksgiving, that’s for sure. We are just grateful.”

In addition to the food, Corky Krupp also donated knitted scarves and hats, as well as other items made by herself and several others.

Bradshaw noted that about 450 lunches were available, all fully paid for. And while this is the first year for United Methodist, it’s safe to assume there will be more events to bring together and give back to the community.

“We are grateful to be able to serve and have been blessed so much. Why not be able to reach out to those who are going through hard times? We are grateful to our community for the opportunity to do this. It’s not possible without a community coming together and seeing a need and reaching out to it,” Bradshaw said.