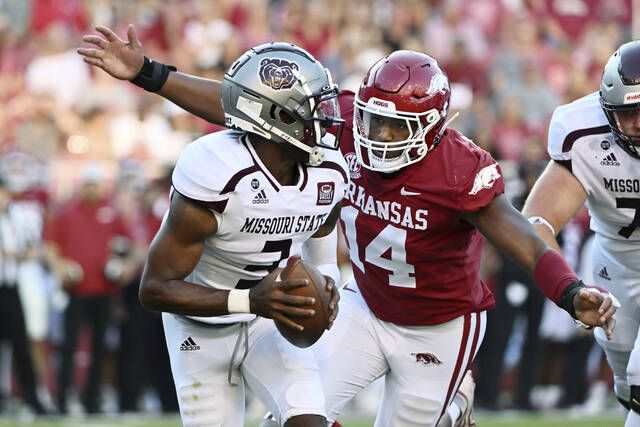 Georgia and Alabama have held the top two spots in the AP Top 25 for the past three weeks and are a good bet to stay there after this weekend’s games.

The rest of the Southeastern Conference — at least the top half — has also turned out to be pretty good, but that could change when four of the eight ranked teams play each other.

The Razorbacks (3-0, 1-0 SEC) have been on a steady rise since opening at No. 19 in the preseason poll, though they rank last in the SEC in passing defense, allowing 353 yards per game.

The Aggies (2-1) are hoping to get some offensive momentum going after scoring 34 combined points against Appalachian State and No. 25 Miami. Texas A&M is averaging 313 yards, last in the SEC.

This week’s college football “What to Watch” roundup, presented by Regions Bank:

Wake Forest coach Dave Clawson called Clemson the benchmark in the Atlantic Coast Conference. The Demon Deacons have been no match for the Tigers for a long time.

Clawson is 0-8 against Clemson, and Wake Forest hasn’t won the series since 2008, a 13-game stretch. The Tigers have won their last four games by an average of 38 points, but the odds expect this one to be closer with Clemson the FanDuel favorite at 7 1/2 points.

Ohio State’s CJ Stroud was a Heisman Trophy finalist a year ago and has re-inserted himself into the conversation this season.

The second-year starter has been putting up bigger numbers each week, and last week he had 367 yards and five touchdowns against Toledo. Stroud has thrown for 941 yards, completed nearly 73% of his passes and has 11 TDs and no interceptions through three games.

Stroud and the third-ranked Buckeyes will get a tough test this week against Wisconsin, which is ranked in the top 10 in total defense and offense.

Numbers you need to know

.824 is ACC winning percentage in non-conference games, best since 2000.

11.13 — Penn State’s Nicholas Singleton’s yards per carry are the best in the FBS.

13 — It’s been years since Kansas last started a season 3-0. The Jayhawks play Duke (3-0) in a football rivalry between the schools known as basketball blue bloods.

The Bears made a mistake against No. 19 BYU, but are still among the favorites to win the Big 12.

They might have to go through cyclones to get there.

Iowa State is off to a 3-0 start for the first time since 2012 and has one of the stingiest defenses in the country, allowing 27 points per game. The Bears can still put up big offensive numbers — 501 yards against Texas State last week — so it will be a power play.

The Buffaloes are 0-3 for the first time since 2012 and have been outscored 128-30, and athletic director Rick George felt it necessary to issue a statement in support of Dorrell.

Colorado ranks near the bottom of the FBS in scoring, total offense, defense and total defense — a very poor combination.

The road doesn’t get any easier with UCLA (3-0) in town on Saturday.