Todaypennsylvania.com
Home Uncategorized What you need to know on day 7 of the Russian assault... 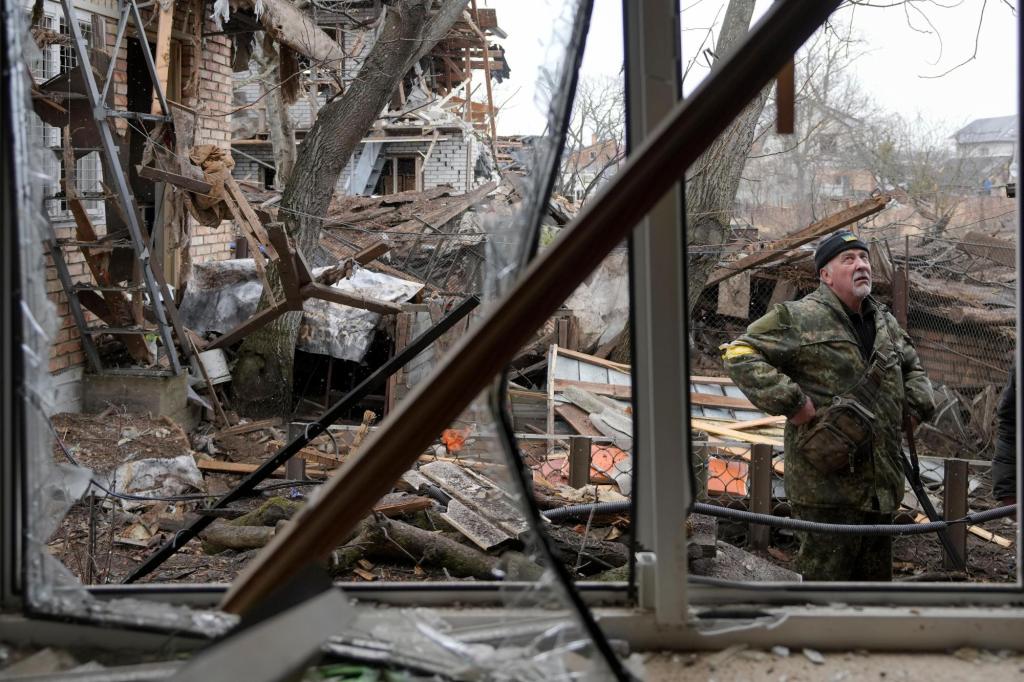 The number of people fleeing Ukraine after the invasion of Russian troops on February 24 has reached 1 million, the UN refugee agency said on Wednesday.

The influx of people fleeing Ukraine – by car, train and on foot – marks the quickest refugee exit of the century. Shabia Mantu, a spokeswoman for the Office of the United Nations High Commissioner for Refugees, said that “at this rate” it could be “the biggest refugee crisis of the century”.

Russia and Ukraine said on Wednesday they were ready to hold talks for the second time, which are expected to take place in Belarus on Thursday. It seems that the two sides have little in common.

Also Wednesday, the UN General Assembly condemned the invasion and called on Russia to withdraw its troops from Ukraine.

Meanwhile, Russia’s assault on Ukrainian cities continued. Russia has said it has taken control of its first major Ukrainian city, Kherson, but the claim has been challenged. In a video address to the people early Thursday, Ukrainian President Volodymyr Zelensky called on Ukrainians to continue resistance, but did not comment on whether the Russians had captured any cities, including Kherson.

Here are the key things you need to know about conflict:

The office of the President of Ukraine on Wednesday night said that the country’s delegation is heading for the second round of talks with Russia since the beginning of the invasion, but did not say when expected arrival. Aide to Russian President Vladimir Putin and head of the Russian delegation Vladimir Medinsky told reporters that the Ukrainians are expected to arrive in the Brest region of Belarus, which borders Poland, for talks on Thursday.

Earlier on Wednesday, Ukrainian Foreign Minister Dmitry Kuleba said his country was ready to resume talks, but noted that Russia’s demands had not changed and that he would not accept any ultimatums.

A Russian official said troops had taken control of the coastal city of Kherson, a statement denied by the Ukrainian military.

Russian Defense Ministry spokesman Igor Kanashenko said on Wednesday that a key port city in the Black Sea with a population of nearly 300,000 is under “complete control” of Russia and that talks are under way between Russian commanders and city and regional authorities on how to maintain order.

Kherson was one of at least three cities surrounded by Russian troops, along with the coastal cities of Mariupol and Kharkiv in northeastern Ukraine.

Russia’s attack on Kharkiv, home to nearly 1.5 million people, continued with strikes on regional police and intelligence, as well as on the university building across the street, according to Ukrainian emergency services and government officials. The blasts also affected the central square near other government buildings, including the city executive committee.

Zelensky’s adviser Alexei Arastovich said that the Russian offensive on Kharkiv was stopped, so Russia responded by firing rockets and air strikes at the city.

“Kharkiv today is the Stalingrad of the 21st century,” Orastovich said, adding that several Russian planes had been shot down over the city.

The head of the Kharkiv regional administration Oleg Sinegubov said that 21 people had died and at least 112 had been injured in the previous day.

AND WHAT ABOUT GALTELNA WHERE?

Russia reported its military losses for the first time since the invasion began last week, saying nearly 500 of its troops had been killed and nearly 1,600 wounded. Ukraine insisted that Russia’s losses were much greater, but did not immediately disclose its own.

A 40-mile (64-kilometer) column of Russian tanks and other equipment remained outside Kyiv as the capital continued to be shelled.

A powerful explosion between the South Station and the Kiev Ibis Hotel took place in Zelensky’s office on Wednesday night. Near this area is the Ministry of Defense of Ukraine. The Ukrainian Railways reported that at the time of the strike, thousands of women and children were evacuated from the station, which suffered only minor damage.

Two cruise missiles hit a hospital in the city of Chernihiv in the north, the Ukrainian agency UNIAN reports the words of the chief health administrator of the city Sergei Pivovar. He said the main hospital building had been damaged and authorities were working to determine the number of victims.

And in Mariupol as a result of obvious Russian shelling at least one teenager was killed and two others were injured. The boys ’families said they played football near the school.

WHAT IS THE HUMANITARIAN SITUATION?

UN High Commissioner for Refugees Philip Grandi wrote on Twitter: “In just seven days, we have witnessed the outflow of one million refugees from Ukraine to neighboring countries.”

This is more than 2% of the population of Ukraine, although some of those fleeing Ukraine are citizens of other countries.

The UN agency estimated that up to 4 million people could eventually leave Ukraine, but warned that even that forecast could be revised upwards. The World Bank has estimated Ukraine’s population at 44 million by the end of 2020.

The State Emergency Service of Ukraine said that more than 2,000 civilians were killed, but it was impossible to verify. The UN Human Rights Office said it had recorded the deaths of 136 civilians, including 13 children, in Ukraine since the February 24 invasion.

The EU commission said on Wednesday it would give temporary residence permits to refugees fleeing violence and allow them to study and work in a bloc of 27 countries. This step will require the approval of Member States that have already expressed broad support.

The UN General Assembly voted on Wednesday to demand that Russia stop its offensive against Ukraine and withdraw all troops, while countries from world powers to small island nations condemn Moscow. Voted 141 against 5 with 35 abstentions.

The resolution expresses regret over Russia’s “aggression” against Ukraine “in the strongest terms.” General Assembly resolutions have no legal force.

The prosecutor of the International Criminal Court launched an investigation on Wednesday into possible war crimes, crimes against humanity or genocide in Ukraine, which begin in 2013 and cover the current conflict.

Prosecutor Karim Khan said he did so after 39 member states of the court requested an investigation.

Russia has become increasingly isolated, affected by sanctions that have wreaked havoc on its economy and left the country virtually without friends except China, Belarus and a number of other countries.

Russia’s leading bank, Sberbank, said on Wednesday that it was withdrawing from European markets amid tightening Western sanctions. The bank said its subsidiaries in Europe were facing an “abnormal outflow of funds and a threat to the safety of employees and branches,” according to Russian news agencies.

In Washington, the White House announced additional sanctions against Russia and Belarus, including expanding export controls aimed at Russian oil refining and organizations that support both countries’ military.

Western sanctions and the collapse of the ruble have forced the Kremlin to fight for the preservation of the economy. Putin received good news on Wednesday when the head of China’s banking regulator said China would not impose financial sanctions on Russia. China is a major buyer of Russian oil and gas and the only major government to refrain from criticizing the invasion of Ukraine.

WHAT ABOUT THE SANCTIONS ON THE ULTRY RICH RUSSIA?

The war has shaken the world community of wealthy Russians facing sanctions that threaten their London mansions, Mediterranean yachts and children’s places in elite European private schools. Some have begun, albeit conditionally, to speak out – though this may be too little to end the war or defend their Western destinies.

Chelsea owner Roman Abramovich confirmed on Wednesday that he is trying to sell the Premier League football club, which he turned into an elite car that won trophies, with his generous investment. Pressure on the British government is growing to include it among the wealthy Russians against whom sanctions will be imposed.